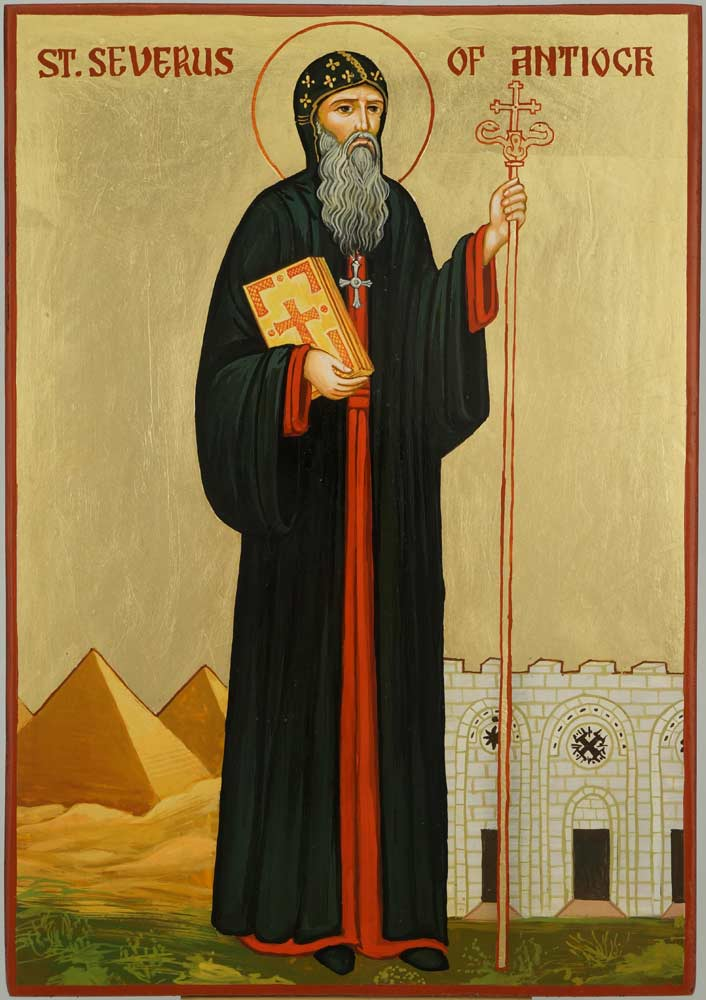 1. The Departure of St. Severus (St. Sawiris), Patriarch of Antioch.

On this day of the year 538 A.D., the holy father St. Severus (AKA St. Sawiris), Patriarch of Antioch, departed. He was from Asia Minor. His grandfather, whose name was also Severus, saw in a vision someone telling him, "The child who is for your son will strengthen Orthodoxy, and his name will be after your name." When his son had this saint, he called him Severus. He was taught the Greek wisdom and church subjects.

Once, the saint was strolling outside the city, a shut-in saint came out of his cave crying, "Welcome to you Severus, teacher of Orthodoxy, and Patriarch of Antioch." Severus marvelled at how he called him by his name, for he did not know him before, and how he foretold what would become of him.

Severus grew in virtue and became a monk in the monastery of St. Romanus. The fame of his righteousness and his ascetic life spread out. When the Patriarch of Antioch departed, the bishops had a consensus to ordain him the Patriarch of the city in the year 512 A.D. The church was illuminated by his teachings which spread to all the universe, and he was one of the fathers who attended the Universal Council at Ephesus.

Shortly after, Emperor Anastasius died and Justinian, who was Chalcedonian in faith, reigned after him. He called upon this holy father and gave him great honors to persuade him to change his stand and to follow the Emperor's belief, but the Saint refused. The Emperor became angry, but the Saint did not fear his anger, and so the Emperor ordered him to be killed. Theodora, the Emperor's wife who was Orthodox in faith, knew about what the Emperor intended to do, so she told the saint to flee from his face.

St. Severus escaped to the land of Egypt and traveled everywhere and visited monasteries disguised as a monk. He strengthened the faith of the believers in the Orthodox doctrine. He dwelt in the city of Sakha in the home of a holy lay leader called Doretheos. God performed through him many miracles. He departed in the city of Sakha, and his body was relocated to the monastery of El-Zugag.

2. The Departure of St. James (Yacobus), 50th Pope of Alexandria.

On this day also of the year 821 A.D., the great saint Abba James (St. Yacobus), 50th Pope of Alexandria, departed. He was a monk in the monastery of St. Macarius. For his holiness and righteousness, he was chosen by a consensus to become patriarch after Pope Mark, 49th Pope, had departed. He was enthroned in the month of Bashans in the year 810 A.D.

St. James renovated the churches and populated the monasteries, and God granted him the gift of performing miracles. One of the deacons in Alexandria dared to say to him rudely, "Pay what you owe to the churches, or else go to your monastery." The Pope replied to him, "You will never see me again from now on." The deacon went home, immediately became sick and died shortly after.

Another miracle: There was a lay leader (Archon) named Macarius from Nabarouh who was very well advanced in years and had no children. After a while, God gave him a son. He made a feast to celebrate this occasion, and invited Abba James. During the celebration, the child died but his father did not panic. He carried the child in his hands and placed him in faith before the Pope, trusting that God would hear His chosen one, and give life to his child. The Pope took the child and made the sign of the cross on his forehead, his heart and his chest, while he prayed, "My Master, Jesus Christ, the Giver of Life, raise this child alive again by Your mighty power." He breathed in his face, and the soul of the child returned to him, and he gave him to his father. When he finished his good strife, Abba James departed in peace, after he had been on the throne of St. Mark for 10 years, 9 months and 28 days.