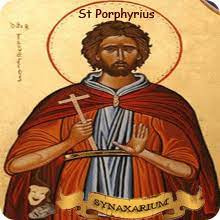 Tout 18: On this day, St. Prophorius, was martyred. He was a comedian and jester and was non-Christian. When Constance, the son of Constantine departed, Julian the Infidel, who was killed by St. Marcurius, reigned after him. This infidel and heretic was the nephew of Emperor Constantine, and he incited idol worshiping. Many of the believers were martyred on his hands. On his birthday, he gathered jesters, comedians, and people of the circus; Prophorius was one of them.

The infidel emperor ordered him to imitate the Christians. When he came to the ritual of the holy baptism and made the sign of the Cross over the water in the Name of the Father and the Son and the Holy Spirit, the Lord enlightened his mind and he perceived a divine grace coming down on the water and light shone from it. He immersed into the water three times, then went up and put on his clothes. He confessed that he became Christian.

The emperor rebuked and threatened him. Then the emperor promised to give him many gifts. In spite of that, the Saint went on saying, "I am Christian. I am Christian." Finally, the emperor ordered his neck to be cut off and he received the crown of martyrdom.

His intercession be for us. Amen.