Tout 19 : The Commemoration of St. Gregory, Patriarch of the Armenians 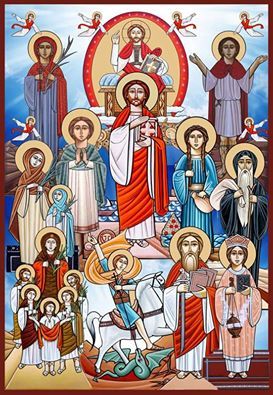 The Commemoration of St. Gregory, Patriarch of the Armenians

On this day we commemorate St. Gregory, Patriarch of the Armenians, who became a martyr without bloodshed. He made himself a slave in the country of Armenia in the days of King Tiridates about the year 270 A.D. This king was not Christian. When he came into the temple to offer up incense to the idols, he summoned the saint to offer up incense with him, but the saint refused. The king inflicted upon him severe tortures and finally cast him in an empty pit. The Saint lived there for 15 years.

Near the pit lived an old widow, and she saw in a vision someone telling her, "Make bread and cast it into this pit," and she continued to do this for 15 years.

It happened that the king ordered the killing of the virgins Arbsima and Agatha, and their friends. After the killing he became exceedingly sad, because he wanted to marry St. Arbsima. He suffered a serious illness from which he did not recover until his sister saw in a dream someone telling her, "Unless you bring up Gregory out of the pit, your brother will not be cured."

They brought the saint out of the pit, and he prayed over the king, and he was cured from his sickness (1).

His intercession be for us, and Glory be to our God, forever. Amen