Tout 20 : Departure of pope Athanasius the Second : The Martyrdom of St. Melitina : The Departure of St. Theopista. 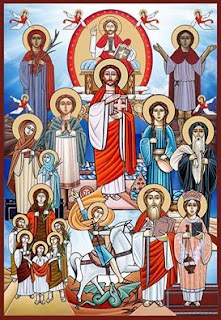 1. The Departure of pope Athanasius the Second, the Twenty-Eighth Patriarch of the See of St. Mark.

On this day of the year 512 A.D., the righteous father St. Athanasius II, 28th patriarch of the See of St. Mark, departed. This father was the steward of the churches of Alexandria. When the holy father Abba Peter III departed, the bishops, elders and people agreed to ordain him patriarch for what was known of his Orthodox faith and knowledge.

He was a pious man, filled with the Holy Spirit and faith. When he became patriarch, he shepherded the flock of the Lord Christ exceedingly well, and he protected them from the snatching wolves with his teachings and prayers.

He sat on the episcopal throne for three years and nine months, then departed in peace.

His prayers be with us. Amen

2. The Martyrdom of St. Melitina the Virgin.

On this day also is the commemoration of the martyrdom of St. Melitina the Virgin.

3. The Departure of St. Theopista.

Also today we commemorate the departure of St. Theopista. She was married and had a son. Her husband died while she was still young. She took it upon herself to become a nun. She started to practice the spiritual life. She persisted in fasting and continual prayers and worshipping day and night. She went to the holy father Abba Macarius, bishop of Nekios. She bowed to him, took his blessings, then she asked him to pray on her and put on her the garb of monasticism. The bishop advised her to try for a year and he promised her that he would put on her the garb of monasticism after that year.

She went to her house and shut herself in a small room. She closed its door, and made a small opening in it. Her son, who was then 12 years old, was taking care of her needs. She embarked in strenuous worships with asceticism and devotion. The year elapsed, and the bishop had forgotten that he had promised this saint that he would put on her the garb of monasticism.

He saw her in his sleep in a shining figure, telling him, "My father, how did you forget me till now, and I am passing away tonight?" The father the bishop saw that as if he was awake, he prayed on her the prayer for ordaining monks, and put on her the garb of monasticism. When he did not find a Kalansowa (cover for the head), he took off his own and put it on her head. Then he put on her the holy Eskeem. He asked his disciple for another Kalansowa and put it on. She had a silver cross in her hand which she gave to him saying, "Accept this from your disciple." And it was said that when he awakened, he found the cross in his hand and he looked attentively at the cross which was beautifully made. He was amazed and glorified God.

Early in the morning he went with his disciple to the house of this blessed woman. Her son received him crying with tears. When he asked him why he was crying, he replied saying, "My mother called me in the middle of the night and bid me farewell and told me whatever the bishop tells you, do and do not break it. I will depart this night to go to the Lord Christ. She prayed over me and advised me, saying, 'Keep all that I commanded you and do not disobey our father, the bishop, and here now I am in your hands.'"

The bishop came to where the saint was lying and knocked on the door, but she did not answer. He said, "This blessed saint had departed indeed," and he ordered his disciple to open the door. When the bishop entered, he found that she had given up her soul. She had on the Eskeem that he had put on her in his vision and also the Kalansowa that he had on.

His eyes were filled with tears. He praised and glorified God who works out the satisfaction of His saints. The bishop shrouded her as was the habit of the monks and called the priests who carried her to the holy church and prayed over her with great honor.

There was in the city a paralytic infidel man, suffering from evil spirits. When he heard the chanting of the priests, he asked his people to carry him and take him where the body of the saint was. When they brought him to the church, he drew near to the holy body with faith and he was cured instantly. The devil came out of him, and he became well. He and his people believed in the Lord Christ and the bishop baptized them.

And everyone who had a disease or a deformity would come to the church and touch the holy body and would be healed immediately. When the governor heard about these wonders, he and most of the city believed in the Lord Christ. He came to the church, carried the body and buried it with honor.

Glory be to our Lord and Savior, Jesus Christ, and His good Father and the Holy Spirit, forever. Amen.