Baba 1 : The Martyrdom of Saint Anastasia 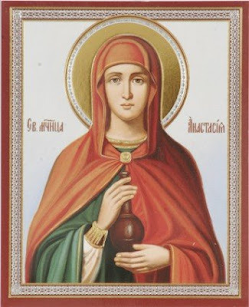 On this day, St. Anastasia was martyred. This fighter was a native of Rome, and the daughter of Christian parents. They raised her well and taught her the Christian manners. When she grew up, her parents wanted her to get married, but she did not agree with them for she had forsaken the vanities of the world and its lusts.

She instead chose to lead a spiritual life and longed for the heavenly glories since her young age. She entered one of the convents of the virgins in Rome and put on the monastic garb. She subdued her body with devoutness and asceticism. She did not eat except once every two days. During the holy Lent she ate only on Saturdays and Sundays after the prayer of the sixth hour of the day. Her food during all the days of her monastic life was dry bread and salt.

It came to pass that some of the convents of virgins, nearby the convent where this saint was staying, were celebrating a feast. The abbess took St. Anastasia, with some of the virgins, and went to join in celebrating that feast. On their way, St. Anastasia saw the soldiers of Emperor Decius the Infidel torturing some Christians and dragging them. Her heart became inflamed with divine love and she shouted at them saying, "O you hard-hearted men is that what you do to those whom God created in His own form and image and for whom He gave Himself up?" One of the soldiers seized her and brought her to the Governor who asked her saying, "Is it true that you are a Christian, worshipping Him who was crucified?" She confessed the truth and did not deny it. He inflicted her with severe tortures, then he crucified her and lit a fire under her, but it did not harm her. When she did not give up her faith because of these pains, he commanded that her head be cut off. She said a long prayer, then she bowed her head and the swordsman cut off her neck and she received the crown of martyrdom.

Her intercession be for us and Glory be to our God, forever. Amen.