Baba 10 : The Martyrdom of St. Sergius, the Friend of St. Bacchus 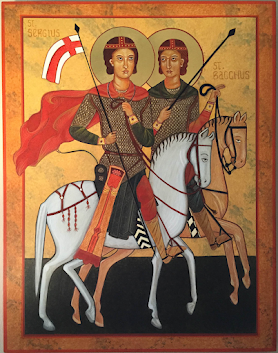 Baba 10 : The Martyrdom of St. Sergius, the Friend of St. Bacchus

On this day, St. Sergius, the friend of St. Bacchus, was martyred. He was a high ranking soldier, advanced in the court of Emperor Maximianus, who showed him great favor. Because this Emperor was pagan and these two saints were people of faith, he sent them to Antiochus, King of Syria, to torture them and slay them if they did not forsake their faith.

Antiochus inflicted St. Bacchus with severe tortures and, when he did not dissuade him from his Christianity, he ordered his men to slay him. They killed him and cast his body into the River Euphrates. The waves brought him to the bank near two holy men. The Lord sent an eagle to guard the pure body and inspired the two saints to take it. They took the body with reverence and buried it. St. Sergius was sad for his friend Bacchus until he saw him in his sleep in a beautiful palace, shining brightly; so his soul was exceedingly comforted. Later on, the Governor commanded to drive nails into St. Sergius' feet, and to send him to El-Rusafa tied to the tails of the horses; his blood flowed down on the ground. On their way, they met a virgin damsel, who gave them water to drink. When she saw the condition the saint was in, she felt sad for him and she pitied his youth and his fine form. The saint told her, "Come, follow me to the city of El-Rusafa to take my body," and she followed him. The Governor of El-Rusafa was a friend of St. Sergius, and it was through St. Sergius, that the Governor had this position. The Governor tried to convince him to change his mind to save his life. When St. Sergius did not accept his advice, he ordered his head cut off. That virgin came and received the blood which flowed from his holy neck and kept it in a clip of wool.

However, the holy body was kept until the end of the days of persecution when they built a church for him at El-Rusafa. The church was consecrated by 15 bishops. They laid his holy body in a coffin made of marble. Those who were present witnessed that a fragrant oil flew from his body and it healed the sick.