Baba 12 : The Martyrdom of St. Matthew the Evangelist. 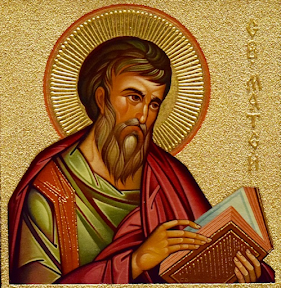 On this day also, St. Matthew the Evangelist, was martyred. He was one of the Twelve Disciples and his name was Levi. He was the one sitting at the receipt of custom outside the city of Capernaum, when the Lord Christ said to him, "Follow Me." He left all, rose up, and followed Him. He made for the Lord Christ a great feast in his own house. That made the Pharisees murmur against Him saying to His disciples, "Why do your teacher eat and drink with tax collectors and sinners?" Jesus answered and said to them, "Those who are well do not need a physician, but those who are sick. I have not come to call the righteous, but sinners to repentance." (Luke 5:27-32)

He preached in the land of Palestine and Tyre and Sidon. Then he went to Ethiopia. He entered the city of priests and converted them to the knowledge of God. When he wished to enter the city, he met a young man who told him, "You will not be able to go in unless you shave off the hair of your head and carry palm branches in your hand." He did as the young man told him. And, as he was thinking about that, the Lord Christ appeared to him in the form of the young man who had met him earlier, and after He encouraged and comforted him, disappeared. He realized that this young man was the Lord of Glory Himself.

He then entered the city as one of its priests. He went to the temple of Apollo and found the high priest, and talked with him concerning the idols that they were worshipping. He explained to him how those idols did not hear or sense anything and how the true Mighty Lord is He who created the Heaven and Earth. The Lord made through him a wonder: a table came down to them from Heaven and a great light shone around them. When Hermes the priest saw this wonder, he asked him, "What is the name of your God?" The apostle replied, "My God is the Lord Christ." Hermes, the priest, believed in Christ and many people followed him.

After he had preached in other countries, he went back to Jerusalem. Some of the Jews which had been preached to, and had believed and been baptized by him, asked him to write down what he had preached to them. He wrote the beginning of the Gospel attributed to him in the Hebrew language but he did not complete it. It was said that he finished it during his preaching in India, in the first year of the reign of Claudius and the ninth year of the Ascension. His martyrdom was consummated by stoning by the hands of Justus the Governor, and his body was buried in Carthage of Caesarea by some believers, in a holy place.