Baba 15 : The Martyrdom of Saint Panteleimon, the Physician 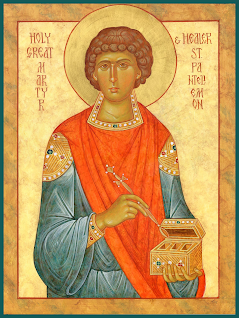 On this day of the year 45 A.D., St. Panteleimon (Bandleamon), who was from the city of Nicomedia, was martyred. His father worshipped idols but his mother was a Christian. They educated him well and taught him the profession of medicine. He met a priest whose name was Hermolaus (Armolas) who taught him the facts of the faith of the Lord Christ and baptized him. He reached a high standard of virtuous life. God wrought great wonders through him. Once, a blind man came to him to be treated by his medicine. He made the sign of the Cross over his eyes in the Name of the Father and the Son and the Holy Spirit and his eyes were healed and he regained his vision completely.

When the Emperor heard the news of his healing this blind man, he had the blind man brought to him and asked him about how his eyes were healed. He told him St. Panteleimon healed them by laying his hand on them and by saying, "In the Name of the Father and the Son and the Holy Spirit." He confessed before the Emperor that he was a Christian, so the Emperor immediately had his neck cut off.

The Emperor ordered that St. Panteleimon be brought to him and asked him about his belief. He confessed that he was a Christian. He tried to persuade him by all means and promised him many things, but he would not change his confession. Then he shouted out to him and threatened to inflict upon him different kinds of tortures. But he did not move. The Emperor inflicted upon him severe tortures on different days, sometimes beating and suspending him and often times casting him into the sea or into the fire. The Lord Christ appeared to him in the form of Hermolaus, the priest who baptized him and taught him the facts of faith, to strengthen him, and walked with him as if He was sharing with him every punishment which befell him.

Later on, the Emperor ordered to behead him. When St. Panteleimon went to the place of execution, he prayed to the Lord Christ and supplicated Him. He heard a voice from heaven announcing to him what had been prepared for him from heavenly joy. The soldiers also heard that voice and immediately believed. They went forth to the Emperor and confessed their faith in the Lord Christ. The Emperor ordered his men to cut off their necks, too, and they all received the crown of martyrdom.

Their intercession be for us and Glory be to our God, forever. Amen.