On this day of the year 822 A.D., the pure father Abba Simon II, 51st Pope of the See of St. Mark, departed. This saint was the son of Orthodox Christian parents of the nobles of Alexandria. He nursed the milk of the faith from his childhood and he learned the doctrines of the church. He chose for himself the monastic life, so he went to the desert of Scete. He became a monk in the cell of his predecessor Abba Jacob, the Patriarch. He dwelt with Abba Jacob for many years during which he exhausted his body by strenuous ascetic life, and many worships.

When Abba Marcus II became a Patriarch, he requested St. Simon from his spiritual father Abba Jacob for what was known of his good reputation and his sound judgement. He stayed with Abba Marcus until his departure. When Abba Jacob, his spiritual father, became patriarch, he kept Abba Simon with him and he benefitted from him often. When Abba Jacob departed, the bishops, priests, and elders unanimously agreed with a spiritual unity to bring forward this father for what they had seen of him (as to righteousness and Orthodox Faith) during his stay with the two Patriarchs who proceeded him. They seized him, bound him and ordained him a Patriarch. He perused an angelic life, which was well-pleasing to the Lord. And, as God wished to repose him, he did not stay on the throne but for five and a half months and departed in peace. His prayers be with us. Amen.

2. The Martyrdom of St. John the Soldier.

On this day also was the martyrdom of St. John the soldier, who was from the city of Ashrobah.

The blessing of his prayers be with us and Glory be to our God, forever. Amen. 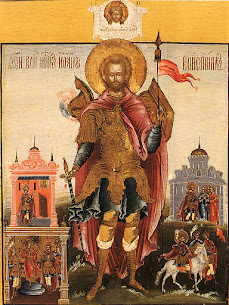