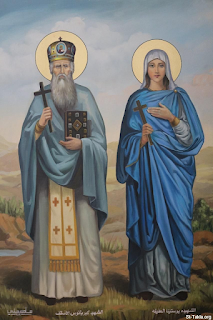 The Martyrdom of St. Cyprian (Cyprianus) and St. Justina.

On this day also in the year 257 A.D. the honorable St. Cyprian (Cyprianus) and St. Justina, were martyred. Cyprianus was an infidel and a magician. He learned magic in the countries of northwest Africa until he excelled over his fellows. His excessive impudence and his arrogance made him go to Antioch to challenge the magicians there and to pride himself over them of his knowledge.

When he arrived there, his fame spread. A young man, the son of one of the nobles of the city, heard about him. This young man lusted for a Christian virgin who was called Justina. He saw her going to church and his heart became inflamed with her love. He was unable to obtain what he desired of her either by money, threat, or magic.

He sought Cyprian and complained to him about his condition, that he might make him gain favor with Justina's heart and fulfill his desire of her. Cyprian promised him the fulfillment of his desire. He used all the trickery of his sorcery but failed. Every time he sent her a host of demons, they found her praying, so they came back defeated.

When Cyprian failed, he called the demons and told them, "If you do not bring Justina to me, I shall adopt Christianity." The chief of the demons thought out a device to deceive him. He ordered one of his soldiers to disguise himself and to take the form of Justina and then go to Cyprian. He hastened and made it known to Cyprian her coming, so he rejoiced and waited for her. Then Satan, disguised as Justina, came to him, and Cyprianus rejoiced, and rose up to embrace her. Because of his great joy in her, he told her, "Welcome, Queen of Women, Justina." Upon the mere mention of her name, Satan, disguised as her, melted away and disappeared like smoke, and an unpleasant smell spread out of him. Cyprianus knew that this was a deceitful trick of Satan who could not stand before the mentioning of her name.

Immediately Cyprian rose up and burnt his books of magic. He was baptized by the patriarch of Antioch who put on him the monastic garb. After a while he ordained him a deacon, then a priest. Later on, after he had grown in virtues and in the doctrine of the church, they ordained him bishop of Carthage in the year 351 A.D. He took St. Justina and made her the head of a convent there. When the Ecumenical Council convened at Carthage, this saint was one of those who attended it. When Emperor Decius heard of them he had them brought before him, and he demanded them to raise incense for the idols. When they refused, he inflicted upon them many tortures and finally cut off their heads with the sword.

Their prayers be with us, and Glory be to our God, forever. Amen.