Tout 25 : The Departure of Jonah, the Great Prophet 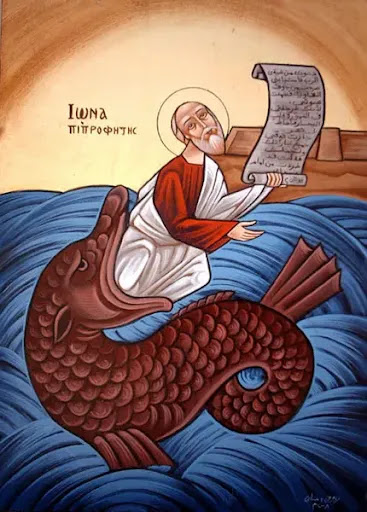 On this day, the great prophet Jonah, the son of Amittai, departed. It was said that he was the son of the widow of Zar-e-phath whom Elijah the Prophet had raised from the dead. Jonah followed Elijah, served him and received the grace of prophesying. God inspired him to go to the city of Nineveh to admonish its people and to warn them that after three days the city shall be overthrown. Jonah pondered in his heart saying, "If God wished to destroy them He would not forewarn them. I fear that if I go to them and convey to them this warning, they might repent and God would not destroy them. I would be a liar and no one will listen to me and probably may be get killed because I conveyed to them a false message from God. So I will arise and flee." What did this prophet think of? How could anyone flee from the face of God? By escaping, he wanted to get away from the city of Nineveh. He did not want to admonish them knowing that God is gracious and merciful, slow to anger and repentant of the evil. He thought that by staying away from Nineveh the Lord would send another prophet to preach to this city.

The escape of Jonah the Prophet, and his having been cast into the sea are to make manifest the miracle of his remaining in the belly of the whale for three days and then coming out safely. This was a symbol of, and evidence for, the resurrection of our Savior from the sepulcher, unchanged, after three days.

Jonah rose up to flee from the presence of the Lord and went down to Joppa; he found a ship going to Tarshish and sailed on it. The Lord sent out a great wind and there was a mighty tempest in the sea and the ship was about to break. The people were all afraid, and cried every man to his god. They said everyone to his fellow, "Come and let us cast lots, that we may know because of whom this evil has befallen us." And when they had cast lots, it fell upon Jonah. They said to him, "What have you done that brought such an affliction on us?" He replied, "Cast me in the sea and you shall be saved." They begged the Lord's pardon, then they cast him into the sea, and a great whale swallowed him. He remained in its belly for three days and three nights and then he was cast out on the seashore.

He rose up straightaway and came into Nineveh. He preached to its people and they all repented: The King, the nobles, and the poor, the old and the young. They all cried to God with fasting and everyone turned from his way and the Lord accepted their repentance and had mercy upon them. Jonah returned to the land of Israel and died there. He was more than 900 years before the advent of the Lord Christ. He prophesied in the days of Amos and his son Hosea. He lived nearly 100 years, out of which he prophesied more than 70 years.

His prayers be with us, and Glory be to our God, forever. Amen.