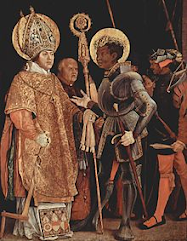 Saint Maurice (also Moritz, Morris, or Mauritius; Coptic: Ⲁⲃⲃⲁ Ⲙⲱⲣⲓⲥ) was an Egyptian military leader who headed the legendary Theban Legion of Rome in the 3rd century, and is one of the favorite and most widely venerated saints of that martyred group. He is the patron saint of several professions, locales, and kingdoms.

According to the hagiographical material, Maurice was an Egyptian, born in AD 250 in Thebes, an ancient city in Upper Egypt that was the capital of the New Kingdom of Egypt (1575-1069 BC). He was brought up in the region of Thebes (Luxor).

Maurice became a soldier in the Roman army. He was gradually promoted until he became the commander of the Theban legion, thus leading approximately a thousand men. He was an acknowledged Christian at a time when early Christianity was considered to be a threat to the Roman Empire. Yet, he moved easily within the pagan society of his day.

The legion, entirely composed of Christians, had been called from Thebes in Egypt to Gaul to assist Emperor Maximian in defeating a revolt by the bagaudae. The Theban Legion was dispatched with orders to clear the Great St Bernard Pass across the Alps. Before going into battle, they were instructed to offer sacrifices to the pagan gods and pay homage to the emperor. Maurice pledged his men's military allegiance to Rome. He stated that service to God superseded all else. He said that to engage in wanton slaughter was inconceivable to Christian soldiers. He and his men refused to worship Roman deities.

However, when Maximian ordered them to harass some local Christians, they refused. Ordering the unit to be punished, Maximian had every tenth soldier killed, a military punishment known as decimation. More orders followed, the men refused compliance as encouraged by Maurice, and a second decimation was ordered. In response to the Theban Christians' refusal to attack fellow Christians, Maximian ordered all the remaining members of his legion to be executed. The place in Switzerland where this occurred, known as Agaunum, is now Saint-Maurice, Switzerland, site of the Abbey of St. Maurice.

So reads the earliest account of their martyrdom, contained in the public letter which Bishop Eucherius of Lyon (c. 434–450), addressed to his fellow bishop, Salvius. Alternative versions[citation needed] have the legion refusing Maximian's orders only after discovering innocent Christians had inhabited a town they had just destroyed, or that the emperor had them executed when they refused to sacrifice to the Roman gods.