Tout 27 : The Martyrdom of St. Eustathius and His Two Sons 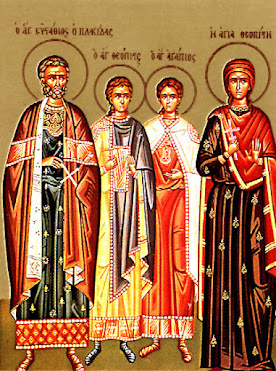 On this day, St. Eustathius and his two sons were martyred. He was one of the ministers of the Roman Empire. Early in his life, he did not know God, but he used to give alms and charity in abundance, and the Lord did not wish that his toil should be in vain. While he was in the desert hunting wild animals, a figure of a cross, appeared to him between the horns of a stag, and it reached up to heaven. He chased the stag in the mountains to hunt it. The Lord spoke to him and told him about his new name which is Eustathius, for he was called, Ephlokidus, before. The Lord ordered him to be baptized in the Name of the Lord Christ and told him that poverty should come upon him speedily.

When he heard that, he descended from the mountain and went to the bishop of the city who baptized him, his wife and his sons, and he changed his name to Eustathius as the Lord had ordered him. Right after that, he lost all what he had from slaves, handmaidens, cattle and money. Then he took his wife and his sons, and went forth from the city of Rome and embarked on a ship. And as he could not pay the fare, they took his wife instead. He took his two sons and came to a river. He crossed over to the other side with one of them and returned to get the other, but he did not find him because a lion had taken him. He went back to get the first but he did not find him either because a wolf had snatched him. He felt deep sorrow because of the loss of his wife and his two sons.

St. Eustathius worked, for a period of time, as a guard in a garden until the Emperor of Rome died and another reigned instead who sent messengers to search for that saint. One of the messengers happened to enter the garden which the saint guarded. The two men recognized each other and St. Eustathius was taken back to the Emperor. The Emperor honored him and reinstated him to his former position.

It happened in that time that a war broke out and they recruited two men from every city to the army. The two sons of the saint were saved by the Divine Will from the lion and the wolf and were brought up in the same city. They remained for a long time not knowing each other. Then the Divine Will arranged that both would be recruited from that city. One day while they were walking, they reached a garden and sat there talking together, and they discovered that they were brothers.

As for their mother, the owner of the ship who had kept her in payment of the fare was a barbarian, but God protected her from him. He kept her in a garden which by the Divine Will was the same garden, where her two sons had gathered in, and she was close by her sons while they were talking and she recognized them. The two sons were assigned to guard the treasury of their father who did not recognize them.

When the Lord willed to gather this blessed family together, the wife entered the place where her husband was, and they recognized each other and rejoiced for reuniting unexpectedly. Then she told him that she had met their sons in the garden. While she was telling him so, the two sons joined them and she cried joyfully, "There are our two sons!" They embraced each other in tears of joy, and they praised God who fulfilled what he had promised and they lived in joy and peace. Later on, the Emperor died and another reigned who worshipped idols. He summoned St. Eustathius and his wife and his sons. He ordered them to worship the idols but they refused. So he ordered his men to torture them with fire, but they were not harmed. Then he commanded to cast them into a brazen cauldron and set fire under it. Thus they delivered their souls into the hands of the Lord, and received the crowns of martyrdom from our Lord and Savior Jesus Christ.

Their prayers be with us, and Glory be to our God, forever. Amen.