Baba 22 : The Martyrdom of Saint Luke the Evangelist 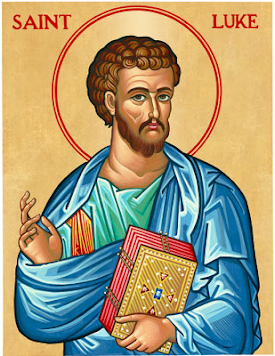 On this day, St. Luke the Evangelist and physician, was martyred. He was one of the 70 disciples mentioned in the tenth chapter of his gospel. He accompanied the Apostles Peter and Paul and wrote their account.

After the martyrdom of these two Apostles, he went through Rome preaching. Those who worshipped idols and the Jews in Rome agreed among themselves and went to Nero the Emperor accusing St. Luke of attracting many men to his teaching with his sorcery. Nero commanded that St. Luke be brought before him. When St. Luke knew that, he gave all the books he had to a fisherman and told him, "Take these and keep them for they will be useful to you and will show you God's way."

When St. Luke came before Nero the Emperor, the Emperor asked him, "How long will you lead the people astray?" St. Luke replied, "I am not a magician, but I am an Apostle of the Lord Jesus Christ, the Son of the Living God." The Emperor commanded his men to cut off his right hand saying, "Cut off this hand which wrote the books." The saint replied to him, "We do not fear death, nor the departure from this world, and to realize the power of my Master." He took up his severed hand and made it reattach to its proper place, then he separated it. Those who were present marvelled and the head of the Emperor's cabinet and his wife believed as well as many others and it was said that they numbered 276. The Emperor wrote their decree and ordered that their heads be cut off together with that of the Apostle St. Luke; thus their martyrdom was completed.

They placed the body of the saint in a hair sack and cast it in the sea. By God's will, the waves of the sea brought it to an island. A believer found it, took it and buried it with great honor. This saint wrote the Gospel bearing his name and the "Acts of the Apostles" addressing his words to his disciple Theophilus who was a gentile.

His blessings be upon us and Glory be to our God, forever. Amen.