Baba 23 : The Martyrdom of St. Dionysius, and the Departure of St. Yousab 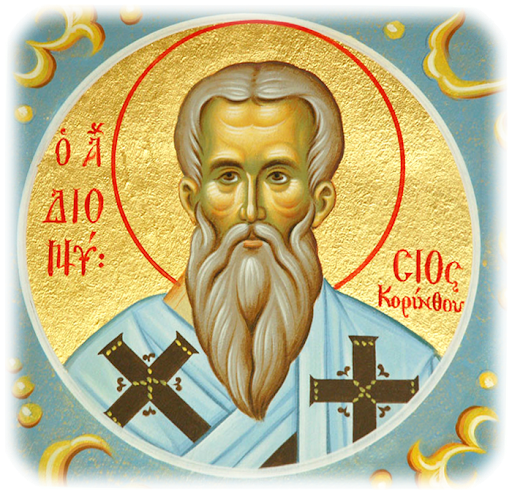 1. The Martyrdom of St. Dionysius, Bishop of Corinth.

On this day also is the commemoration of the martyrdom of St. Dionysius, bishop of Corinth, who became a martyr in the days of Diocletian and Maximianus. He endured many severe tortures for the sake of his faith in Jesus, to Whom is the Glory, until finally they cut off his neck, and he received the crown of eternal glory.

2. The Departure of St. Yousab, 52nd Pope of Alexandria.

On this day of the year 841 A.D., the holy father Abba Yousab (Joseph), 52nd Pope of Alexandria, departed. He was the son of one of the rich nobles of Menuf. When his parents departed and left him, certain believers raised him. When he grew up he gave most of his money as alms, then went to the desert of St. Macarius and became monk with a holy old man. When Abba Marcus II became the 49th Pope of Alexandria and heard about Yousab's conduct, he called him. When Yousab wished to go back to the desert, Abba Marcus ordained him a priest and sent him back. He stayed in the desert for a period of time till the departure of Abba Simon II, 51st Pope.

The papal throne remained unoccupied until some of the bishops agreed with some of the laymen of Alexandria to choose a married man who had bribed them. When the rest of the bishops knew that, they detested their action and prayed to God to guide them to whom He choose. The Lord guided them to Abba Yousab and they remembered his good conduct and management while he was with the father Abba Marcus.

They sent some of the bishops to bring him. They prayed to God saying, "We beseech Thee, O Lord, if Thou have chosen this father for this honor, let the sign be that we find his door open upon our arrival." When they arrived they found his door open, for he was bidding farewell to some visiting monks. When he was about to close his door, he saw them coming, so he received them with joy and welcomed them to his cell. When they entered, they seized him and told him, "Axios" (i.e He is worthy). He cried out and wept. He started to reveal to them his shortcomings and sins. But they did not accept his excuses and they took him to Alexandria and placed their hands over him.

When he sat upon the throne of St. Mark, he greatly cared for the churches. He bought, with what remained of his own income, properties and bestowed them on the churches. He continually taught the people and did not neglect any of them. However, Satan became envious and brought much sorrow upon him. The bishops of Tanes and Miser (Cairo), angered the people of their parishes (because of the matter of dues). Abba Yousab condemned their actions and asked them often to be merciful to their flocks, but they would not accept his behest. Their flocks cried out to him saying, "If you force us to obey them, we shall turn to another denomination." He exerted a great effort to reconcile between them, but it was in vain. He called the bishops from their parishes and told them about these two bishops and repudiated their works. The bishops excommunicated them.

When they were excommunicated, they went to the Governor in Cairo and brought a false accusation against this father. The Governor sent his brother, the Prince, with some soldiers to bring the Patriarch to him. When they came to the Patriarch, the Governor's brother drew his sword to kill him. But the Lord thrust aside his hand and the sword struck a pillar and was broken. The Prince became furiously angry, so he drew his dagger and drove it with all his might into the side of this father. The dagger did not do any harm to him other than cutting his apparel, and it did not reach his flesh.

He continually preached to the sinners and admonished the disobedient, establishing the people in the Orthodox faith which he had received from his fathers. He interpreted to them what was hard for them to understand, guarding them with his teachings and prayers. God made manifest great signs and wonders through this holy father.

Having finished this pleasing life to God, he departed in peace after having sat on the throne of St. Mark 19 years and having been a monk for 39 years, before which he had lived about 20 years.