Baba 29 : The Martyrdom of St. Demetrius of Thessalonica 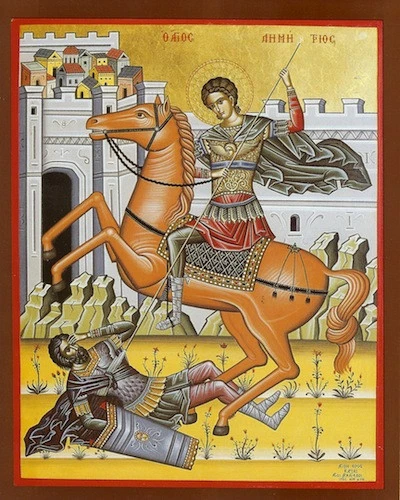 On this day, the great St. Demetrius, was martyred, in the days of Maximianus the Emperor. He was a pious Christian young man from the city of Thessalonica. He learned various subjects, and most of all, those of the Orthodox Church. He taught and preached diligently in the Name of the Lord Christ. He converted many to the faith.

Some made accusations against him to Emperor Maximianus who ordered that he be brought to him. It happened that when he came before the Emperor, a wrestler whose body was strong and huge, and who surpassed the people of his time in strength, was present. The Emperor loved this man and was proud of him to the point that he specified a large sum of money for whoever could vanquish him. A Christian man whose name was Nostor came from among the people who were present at that time and asked St. Demetrius to pray for him and to make the sign of the Cross with his holy hand over his body. The saint prayed and made over him the sign of the Holy Cross which makes those who believed therein invincible.

Nostor went and asked to fight that fighter about whom the Emperor was boasting. Nostor fought him and vanquished him. The Emperor was very sorry and ashamed. The Emperor wondered how Nostor conquered him. He asked the soldiers for the secret behind that. They told him that a man called Demetrius prayed over him and made the sign of the Cross over his face.

The Emperor became angry with the saint and ordered that he be beaten until he offered incense to his idols and worshipped them. When St. Demetrius disobeyed them the Emperor ordered his men to thrust spears at him until his body would be torn to pieces and he would die. They told the saint that to frighten him and make him turn away from his faith in the Lord Christ and worship the idols. He told them, "Do whatever you please, for I will neither worship nor offer incense except to my Lord Christ the True God." The soldiers drove the spears into him until he delivered his pure soul.

When they threw away his holy body, some Christians took it and laid it in a coffin made out of marbles. The body remained hidden until the end of the days of persecution, when the one who had hidden it revealed it. A great church was built for him in Thessalonica, and they laid his body therein.

Many great signs were made by his name. Each day, sweet oil was distilled from his body which cured those who used it with faith, especially on the day of his feast. On his feast day, the oil flowed in a larger quantity than on any other day, and it dripped from the walls of the church and the pillars. Though the gathering was huge, they all received their share, from what they took off the walls and put in their containers. Those of the righteous priests who had seen this told and testified to that.