Hator 7 : The Martyrdom of St. George of Alexandria and More 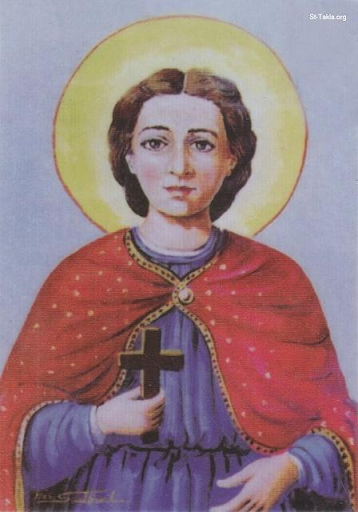 1. The Martyrdom of St. George of Alexandria.

On this day, St. George (Gawargios) of Alexandria, was martyred. His father was a merchant in the city of Alexandria and had no son. It happened that he travelled to the city of Lydd and attended the feast of the consecration of the Church of St. George the martyr. He prayed to God, interceding with His great saint that he might have a son. God answered his prayers, and gave him a son, and he named him George. His mother was the sister of Armenius, the Governor of Alexandria.

His parents died when he was 25 years old. George was merciful, loving and kind to the poor and loved the church. He stayed with his uncle who had only one daughter. One day she went with some of her friends for an outing. While they were walking nearby a monastery outside the city, she heard its monks singing sweet hymns. She was touched by what she had heard and asked her cousin George about it. He replied that those monks had forsaken the world to worship and he guided her to believe in the Lord Christ. He told her about the share of the sinners of the final punishment and the share of the righteous of felicity.

When she returned to her father, she told him that she was a believer of Christ. He tried to reason with her, to dissuade her, and to lure her with great promises. Then he threatened her. When she did not hearken to his words, he ordered that her head be cut off, thus she received the crown of martyrdom.

Later on, the Governor knew that George was responsible for her conversion. He seized him and tortured him severely. Then he sent him to Ansena where they also tortured him and finally they cut off his holy head, thus he received the crown of martyrdom. A deacon whose name was Samuel, took his holy body and carried it to the city of Manf, El-Giza province.

When the wife of his uncle Armenius knew about it, she sent for the body and placed it with the body of her martyred daughter in Alexandria.

Their intercession be for us. Amen.

2. The Martyrdom of St. Nehroua.

On this day also, St. Nehroua, was martyred. He was from the district of Fayyum and he feared God. When he heard the accounts of the martyrs, he went to Alexandria to die for the Name of the Lord Christ.

He was told in a vision that he must go to Antioch. While he was thinking of how to go there and looking for a ship to embark on, God sent to him His angel Michael, who carried him on his wings from Alexandria to Antioch and set him down before Diocletian. There he confessed the Lord Christ. Diocletian asked him about his name and his country, and when he knew Nehroua's story, he marvelled at the manner in which he had come.

Diocletian offered him much money and many prizes to turn him away from his faith, but Nehroua refused. Then Diocletian threatened him, but could not frighten him. Therefore the Emperor ordered that he be tortured in many different ways.

One time they tortured him by releasing lions to attack him, once by burning him in a fire, another by squeezing him in the wheel, and still another time by casting him in a cauldron with fire under it. Finally, they cut off his holy head with a sword and he received the crown of martyrdom. St. Nehroua became a counterpart for those from Antioch who were martyred in the land of Egypt.

It happened that St. Julius El-Akfahsee was present at the time of his martyrdom, so he took his body and sent it with two of his men to St. Nehroua's country with great honor.

Their intercession be for us. Amen.

3. The Departure of St. Mina, Bishop of Tamai (Thmoui).

Today also, St. Mina, bishop of the city of Tamai (Thmoui) El-Amdid in Sinbelawain, departed. His father was from the city of Samannoud. He was the only son of God-fearing parents. They practiced the works of the monks such as fasting, prayers and asceticism until their report was heard throughout the country.

They made their son marry against his will. But he agreed with his wife on keeping their virginity. They remained so, doing many worships as practiced by monks, wearing sackcloth and spending most of their nights in prayer and reading the word of God. This saint longed to be a monk and he discussed it with his wife saying, "It is improper for us to practice the monastic works while we are in the world."

She agreed with him, and he went to the monastery of Anba Antonius, to be far away from his parents. They looked for St. Mina to return him back to his wife and they knew not where he was. From there he went with Anba Mikhail, who became later on the 46th Pope of Alexandria, to the monastery of St. Macarius, where they became monks. That was during the time of the two bright stars Anba Abraam and Anba Gawargah. Father Mina became their disciple, he learned from them, followed the way of their worship and increased in his angelic works until he surpassed in his worship many of the fathers.

Satan envied him for his strenuous fight and afflicted him in his legs and he laid flat on the ground for two months. After that the Lord Christ healed St. Mina, who overcame Satan with the might of God.

Later on, he was called for the rank of episcopate. When the messengers of the Patriarch came to him and he knew the reason for their visit, he wept and was sorrowful to leave the desert. The fathers convinced him that this was the will of God. He obeyed and went with the messengers to the Patriarch who ordained him Bishop of the city of Tamai (Thmoui).

The Lord granted him the gift of healing the sick, the gift of knowing the hidden things and he knew what was in the minds of people. The bishops of the surrounding districts used to come to him for counselling. People from everywhere came to listen to his teachings. He was the father of four Patriarchs and he laid his hand upon them when they were ordained. They were: Anba Alexandros II, Anba Cosma, Anba Theodore, and Anba Mikhail I.

When the Lord Christ wished him to depart from this transient world, He informed him. Anba Mina called the people of his diocese and commanded them to be strong in the Orthodox faith and to keep the divine commandments. Then he committed them to their true shepherd, the Lord Jesus Christ and departed from this transitory world and came to Christ, Whom he loved. The people wept and mourned the loss of their shepherd and their father after the Lord, who cared for their souls. They buried him in a fitting manner and laid him in the place, as he had directed beforehand.

4. The Consecration of the Church of St. George of Cappadocia.

Also on this day, is the commemoration of the consecration of the Church of the honorable saint and great martyr St. George in the city of Lydd. We also commemorate the great wonders and signs, the Lord has done therein which became known throughout the land and sea.

When Emperor Diocletian heard the reports of this church, he sent Eukheius, the head of his army, with soldiers to destroy it. Eukheius came with arrogance to where the icon of St. George was and he began to scoff at the Christians and at the Saint. He had a staff in his hand with which he struck the lamp, which was burning before the icon of St. George and he broke it. A fragment of the lamp fell on his head. Fear and great trembling came upon him and he fell prostrate on the ground. The soldiers carried him, to take him back to his country, for they knew that this had happened to him because of his mockery towards this great martyr. Eukheius died on the way back with disgrace, and they cast him into the sea.

When Diocletian heard this, he became angry and decided to go himself to this church and destroy it. The Lord bore no longer with him to do what he had determined to do and He smote him with blindness and the men of his kingdom rose up against him. The Lord took the kingdom away from him and placed Constantine, a righteous Emperor, in his place. Emperor Constantine closed pagan temples and opened the churches. The churches and the universe rejoiced, especially the church of the great martyr, the star of the morning, St. George.

His intercession be with us and Glory be to our God, forever. Amen.