Hator 8 : The Commemoration of the Four Incorporeal Beasts 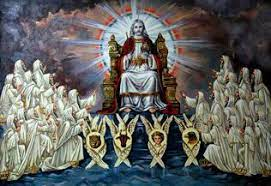 Isaiah the Prophet said: "I saw the Lord sitting on a throne, high and lifted up and the train of His robe filled the temple. Above it stood seraphim: each one had six wings; with two he covered his face, with two he covered his feet, and with two he flew. And one cried to another and said, 'Holy, Holy, Holy is the Lord of hosts: the whole earth is full of His glory.'" (Isaiah 6:1-3) Ezekiel the Prophet said: "Then I looked, and behold, a whirlwind was coming out of the North, a great cloud with raging fire engulfing itself, and brightness was all around it, and radiating out of its midst like the color of amber, out of the midst of the fire. Also from within it came the likeness of four living creatures. And this was their appearance; they had the likeness of a man... and each one had four wings. Their legs were straight; and the soles of their feet were like the soles of calve's feet. They sparkled like the color of burnished bronze..." (Ezekiel 1:4-7)

St. John the Evangelist said: "After these things I heard a loud voice of a great multitude in heaven, saying, 'Alleluia; Salvation, and glory, and honor, and power, belong to the Lord our God,' ... and the four living creatures fell down and worshipped God who sat on the throne, saying, 'Amen, Alleluia... for the Lord God Omnipotent reigns. Let us be glad and rejoice, and give Him glory......'" (Revelation 19:1-7)

Their intercession be for us and Glory be to our God, forever. Amen.