Hator 22 : The Martyrdom of Saints Cosmas, Damian, Their Brothers and Their Mother 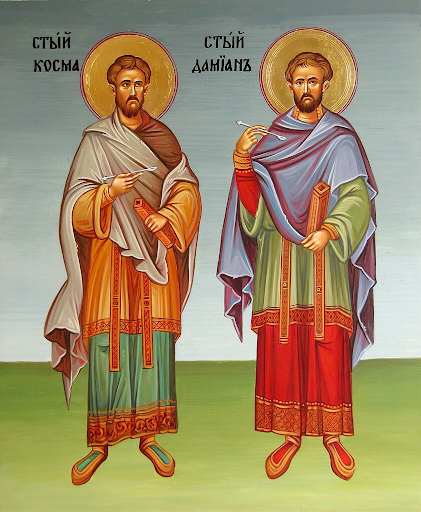 On this day, saints Cosmas and Damian, their brothers, Anthimus, Leontius (Londius) and Euprepius (Abrabius), and their mother Theodata, were martyred. They were from one of the Arab countries. Their mother feared God and was compassionate and merciful towards strangers. She became a widow, while her children were still young. She raised them and instilled in them the fear of God and the love of righteousness. Cosmas and Damian studied medicine and they treated the sick, free of charge. As for their brothers, they went to the desert and became monks.

When Diocletian renounced the faith and ordered the worship of idols, he was told that Cosmas and Damian were preaching in the Name of Christ, and urging others not to worship idols. He ordered them to be brought to the Governor of the city, who tortured them severely by beating them and burning them. He then asked them the whereabouts of their brothers. Upon finding out, he brought them and their mother. He ordered them to raise incense before the idols, but they refused. He then ordered the five to be squeezed through the wheel. When they experienced no harm, he took them out and cast them into a red hot furnace for three days and three nights, then into hot boiling water. Finally he placed them on red-hot iron beds. Through all this, however, the Lord raised them up whole and unharmed to reveal His glory and the honor of His saints.

When the Governor became weary of torturing them he sent them to the Emperor who also tortured them. Their mother constantly encouraged and comforted them. The Emperor rebuked her, but she admonished him for his cruelty and for worshipping idols. He ordered her head to be cut off and she received the crown of everlasting life. Her body remained on the ground and no one dared to bury it for their fear of the Emperor. St. Cosmas screamed at those present saying, "Men of this city, is there not one merciful person among you who will cover the body of this poor old widow and bury her?" Straightaway, Victor, the son of Romanus, came forward, took the body, placed it in a shroud, and buried it.

At the end of the era of persecution, many churches were built in the name of these saints and God made manifest many signs and wonders therein.