Hator 30 : The Departure of St. Acacius, Patriarch of Constantinople, the Martyrdom of St. Macarius and the Consecration of the Church of Saints Cosmas, Damian, Their Brothers and Their Mother. 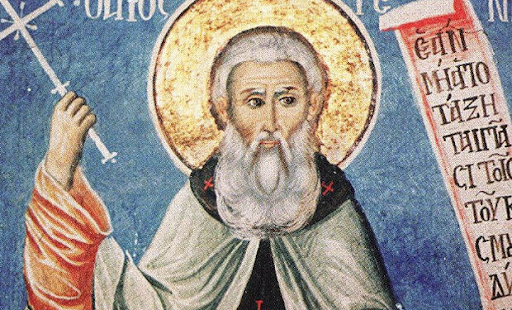 1. The Departure of St. Acacius, Patriarch of Constantinople.

On this day, St. Acacius, Patriarch of the city of Constantinople, departed. He was knowledgeable and well informed about the Holy Books and was an expert in explaining their mysteries. So, he was ordained a priest over the church of Constantinople.

When the council of Chalcedone convened, he refused to attend its meeting and when they called on him to hear his opinion, he refused, claiming he was sick. He was exceedingly sorrowful for the tribulations that befell St. Dioscurus and he made that known to his companions and those he trusted: the Governors, Christians and ministers whom he knew to be dedicated and faithful Orthodox. He thanked the Lord that he did not participate in the works of this council.

When Anatolius, the Patriarch of Constantinople departed, this father was chosen by the believing ministers and the enlightened government officials to be successor. St. Acacius strove diligently to eliminate the division and enmity that dwelled in the church. When he found that the spiritual ailment was deep-rooted and difficult to overcome, he believed that the proper thing to do was to devote his efforts to the salvation of his own soul.

He sent a letter to the holy father, Abba Peter, the Pope of Alexandria, confessing the true faith which he had learned and received from the holy fathers, Abba Cyril and Abba Dioscorus. He followed that letter with many others, asking the Pope of Alexandria to accept him in the fellowship. The Pope of Alexandria answered all his letters, then he wrote him a Catholic letter and sent it with three bishops. They went disguised until they entered Constantinople and there they met Acacius, who treated them with great honor and received the letter from them. He read the letter to his friends, the Orthodox nobles of the city and they all agreed on it and with him, and confessed the True Faith. Then he wrote a letter before them, accepting the faith of Abba Dioscorus, Abba Timothy and Abba Peter and confessing the soundness of their faith.

Afterwards, he accompanied the three bishops to some monasteries and he took part with them in the celebration of the liturgy and the partaking of the Holy Communion. The bishops then exchanged the blessings with him, took the letter and returned it to Abba Peter. The Bishops informed Abba Peter about their fellowship with Abba Acacius and that they had taken part in the liturgy with him. Abba Peter accepted the letter and ordered that Abba Acacius be mentioned in the liturgies and the prayers of the Coptic church.

When the news reached the bishops of Rome, they exiled St. Acacius from Constantinople. He remained in exile until he departed in peace, all the while remaining firm in his Orthodox Faith.

2. The Martyrdom of St. Macarius.

On this day also is the commemoration of St. Macarius, the martyr.

3. The Consecration of the Church of Saints Cosmas, Damian, Their Brothers and Their Mother.