Kiahk 1 : The Departure of St. Peter Elrahawy, Bishop of Gaza and The Consecration of the Church of the Saint Abba Shenouda.

1. The Departure of St. Peter Elrahawy, Bishop of Gaza.

This day marks the departure of St. Peter Elrahawy (the Iberian), Bishop of Gaza. He was born in the year 49 A.D. in the City of Raha (Edessa)(1) to a noble family. When he was twenty years old, his parents gave him to the Emperor Theodosius II, to be one of his attendants. But because he had forsaken the world and its glories, he practiced asceticism and worship while living in the king's palace. He had parts of the relics of the holy martyrs of Persia with him.

Abba Peter left the royal court and became a monk in a monastery. He fought a great spiritual fight. Shortly after, they ordained him Bishop of Gaza and its surroundings, against his will. It was said that when he celebrated his first Liturgy, blood flowed from the Holy Body and filled the Paten.

After the end of Emperor Marcian's reign, Abba Peter went back to the land of Palestine and went on confirming the believers.

One day while he was celebrating the Divine Liturgy, a few of the people present in the church were conversing about earthly matters and were distracted from listening to the prayers. The angel of the Lord appeared to him and reproached him because he did not admonish those who were talking in the church.

Emperor Zeno heard of him and longed to see him, but was not able to do so because Abba Peter did not like the glory of this world. Abba Peter went to the area between Jerusalem and Damascus in Palestine, called Gaur(3) On the feast day of St. Peter(4), 17th Pope of Alexandria, Abba Peter celebrated the Divine Liturgy during which St. Peter appeared and told him, "Christ the Lord is calling you to be with us." Abba Peter called the people and commanded them to be firm in their Orthodox Faith, then he stretched out his hand and delivered up his soul in the hands of the Lord. 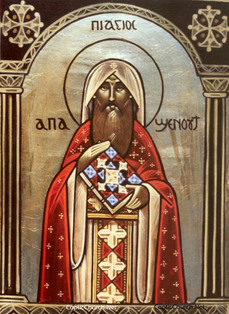 2. The Consecration of the Church of the Saint Abba Shenouda.

On this day also, is the commemoration of the consecration of the church of the great saint, Abba Shenouda (Shenoute) the Archimandrite(5).

(1) El-Raha or Urfa is an ancient city in modern Iraq. It is said that it was Ur of the Chaldees, home of Ibraham.

(3) Designation of that part of the Syrian Groben which constitutes the Jordan valley.

(5) His biography and departure is on the 7th day of Abib.