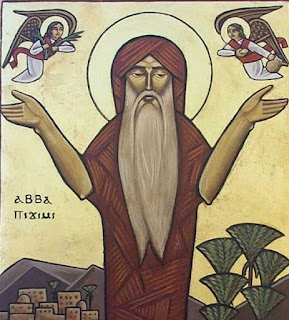 The Departure of the Saint Abba Pijimi.

This day marks the departure of the saint Abba Pijimi. He was a native of Feesha, diocese of Masil. When he was 12 years old, and while he was shepherding his father's sheep, the angel of the Lord appeared to him in the form of a young man and told him, "Let us go and become monks." Abba Pijimi agreed and went with him to the desert of Scete; to a place where three elder monks dwelled, then the angel disappeared. The saint dwelt with them for 24 years until they departed.

Then he left that place and went into the desert, a distance of three days travel. The devils appeared to him in the form of wild beasts, pigs and serpents. They surrounded him to devour him. He was able to discern their intent by the spirit. He prayed and they were vanished. Then he lived in a valley there for three years, fasting a week at a time; and at the end of the week, he ate a handful of dates and drank a little water.

He prayed the Lord's prayer: "Our Father, who art in heaven......", he recited it day and night. Once he fasted for 40 days and another time he fasted for 80 days, to the point that his skin cleaved to his bones. Then an angel brought him bread to eat and water to drink. That bread and water lasted for many years.

Afterwards, the angel of the Lord appeared to him in a vision at night and commanded him to return to his city. Abba Pijimi built a small cell on the outskirts of his city. He dwelt there alone, devoting himself to worshiping and asceticism. He became a good model and a good example for everyone who saw him. The people of his town came to him to be nourished with his spiritual teachings.

One day the angel of the Lord lifted him up and brought him to the land of Euphrates, for its people had gone out of the Orthodox way. He converted them all to the Faith and returned to his place.

Once he was carrying some baskets to the village to sell and he became weary and sat down to rest. The power of the Lord lifted him up with his baskets and carried him to where he wished to go.

One day the great saint Abba Shenouda saw an exceedingly shining pillar and heard a voice telling him, "This is Abba Pijimi." Abba Shenouda went to him, walking until he came to Abba Pijimi's city. They recognized each other through the divine guidance. Abba Shenouda visited with him for a few days then returned to his monastery.

When the day of his departure from this world drew near, he called his disciple and informed him of his departure and commanded him to bury his body in the place where he was. He fell ill and was feverish and, while in this condition, he saw a company of saints approaching him. He delivered up his soul into the hands of God. The angels carried his soul and ascended with it, chanting hymns.