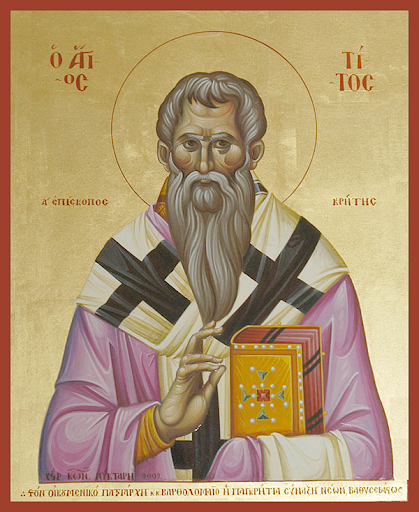 On this day, the relics of the great St. Titus, the Apostle, and the disciple of St. Paul, were transferred from Crete to Constantinople at the order of Emperor Constantine the great.

When Emperor Constantine converted to Christianity, he paid his attention to the affairs of the churches in his empire, decorating them with the best paintings and precious stones, especially those churches in Constantinople, the capital of his empire. He also wanted to enrich the churches with the precious spiritual jewels, by collecting the relics of the saintly apostles and the honored martyrs.

When he heard that the relics of St. Titus were on the island of Crete, he sent some bishops there, and they carried the relics with great honor and brought them to Constantinople. He built for it a splendid sanctuary, placed the body in a coffin which was placed inside the sanctuary.

God honored this saint by manifesting many miracles and signs from his sacred relics. Among them, when they carried the relics to the Sanctuary (the Hekal) of the church, the stone coffer fell on and broke the foot of one of the carriers. The man took some of the oil of the lamp (Kandeel) that was hanging in front of the icon of the saint, and anointed his foot with it, then wrapped it. He remained in the church that night beside the coffer, for he could not go to his home. The following morning, his foot was cured. What remained on it were only traces of blood. He and all those who saw him marvelled. He washed the blood and walked on his feet as usual without pain, glorifying the Father, the Son and the Holy Spirit, the One God, and witnessing to this miracle.

2. The Commemoration of St. Heracleas the Martyr and St. Philemon the Priest.

On this day also, the church commemorates Saint Heracleas, the martyr, and the hermit, St. Philemon the priest.