Kiahk 26 : The Martyrdom of St. Anastasia and the Commemoration of St. Juliana the Martyr. 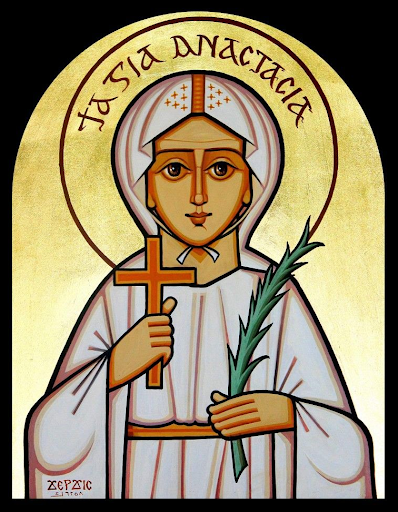 1. The Martyrdom of St. Anastasia.

On this day, of the year 34 A.D., St. Anastasia, was martyred. She was born in the city of Rome in the year 275 A.D., to a pagan father whose name was "Britastanos" and a Christian mother whose name was "Flavia". Her mother baptized her secretly without her father's knowledge and she brought her up in the teachings of the Christian faith. She was steadfast in her faith and no one was able to dissuade her.

When she was of marriage age, her father gave her in marriage to a pagan youth, against her wishes. St. Anastasia prayed to the Lord Christ with fervent supplications, asking Him to separate her from this pagan youth who was away from the faith.

When her husband left to go to his work, she also left to visit those who were imprisoned for their faith and she ministered to them, comforted them, and offered them whatever they needed. When her husband learned about this, he shut her up in the house and placed guards over her. She continued to pray and ask God with tears and supplications to save her from the hands of her husband. God answered her prayer and speeded up his death. She distributed her wealth among the poor and those who were in prison, the confessors and the strivers, for the sake of the faith. When her fame reached "Florus", the Governor, he brought her before him to inquire about her religion. She confessed that she was a Christian. He tried to entice her to leave her faith by promising her many precious gifts. When she did not listen to his promises, he punished her by torturing her with various tortures and when he became weary of her he ordered her to be drowned. She came out from the sea unharmed with the grace of God. When the governor learned that she was still alive, he ordered that she be tied up to four pegs on the ground and be beaten ferociously, then be thrown into a pit of fire. They did so until she gave up her pure soul and received the crown of martyrdom.

2. The Commemoration of St. Juliana the Martyr.

On this day also is the commemoration of St. Juliana the martyr.

Her prayers be with us and Glory be to our God forever. Amen.