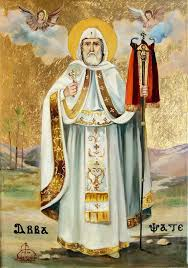 On this day, the great saint Bisadi, the Bishop of "Ebsay", was martyred. When Emperor Diocletian heard that Anba Bisadi and Anba "Ghellanicus" were confirming the Christians in the faith and hampering the worship of idols, he sent to bring them before him. Anba Bisadi asked the messenger to give him a chance for one night. He went to the church and called his people and celebrated the divine liturgy and administered to them the Holy Communion.

He commanded them to be firm in their Orthodox Faith, then he bade them farewell and submitted himself to the Lord. He went with the messenger to Arianus, the Governor of Ansena, and when the latter saw his illumined face and his reverence, he had compassion upon him and said, "You are a man of great dignity and you should have pity upon yourself and obey the command of the Emperor." Anba Bisadi answered and said, "It is impossible for me to replace the kingdom of heaven with this temporal life."

After a lengthy negotiation with him, the Governor ordered Anba Bisadi to be tortured and then thrown in a very hot water bath. God preserved him and raised him unharmed and without any pain. The Governor then ordered him beheaded. Thus, he received the crown of life in the kingdom of heaven.