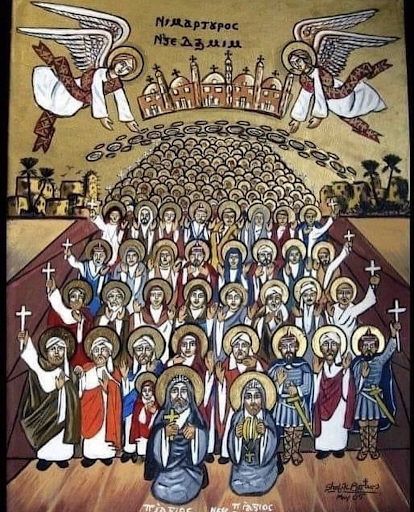 The Martyrdom of 150 Men and 24 Women from Ansena.

On this day, 150 men and 24 women were martyred. They were from the city of Ansena (Antione) and they worshipped idols. They came once to the Governor's place and they watched the torture of St. Paul the Syrian. The Governor ordered the soldiers to gouge out the saint's eyes with red-hot nails then they cast him in prison.

The following morning when they brought him, these men and women were present and they saw that his eyes were whole as they were before. They marvelled saying, "No one can do this sign except God alone Who is the Creator of nature from nonexistent." They cried with one accord, "We believe in the God of St. Paul." They came and bowed down at the saint's feet asking him to pray for them. He lifted them up and blessed them. Then they went before the Governor and confessed the Name of the Lord Christ. He ordered them beheaded and they received the crown of martyrdom.

Their intercessions be with us and Glory be to our God forever. Amen.