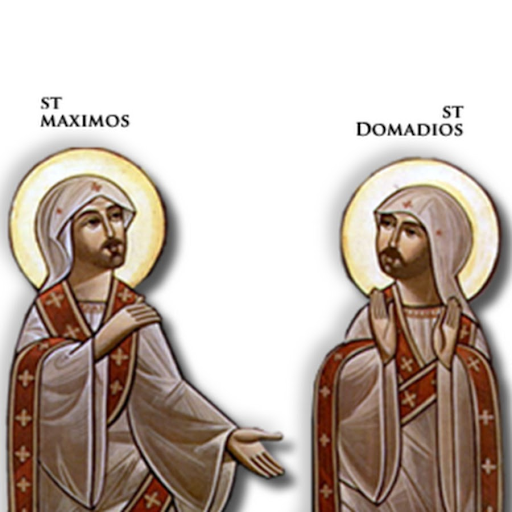 On this day is the commemoration of the two honored saints Maximus and his brother Domatius (Domadius). Their father's name was Walendianus, he was one of the Roman emperors who feared God and was Orthodox in faith. God gave him these two sons who were angelic in their purity and holiness since their young age, always praying and reading the holy books.

When they realized the vanity of this world and all its glory, they decided to leave it and live a monastic life. They asked their father to allow them to go to the City of Nicea, to pray in the place where the first Universal Council was held in 325 A.D. Their father rejoiced, and he sent an entourage of soldiers and servants with them, as was the custom for the children of kings.

When they arrived, they asked the soldiers to go back to their father and tell him that they wanted to stay there for some time. Then they revealed their thoughts to a saintly monk, that they desired to put on the holy garb of the monks. The monk did not agree with them because he feared their father, but he advised them to go to Syria where St. Agabius abided.

They went to St. Agabius and stayed with him until his departure. Before he departed, he put on them the monastic garb, and told them that he saw St. Macarius in a night vision saying, "Command your two sons to come to me after your departure, so that they may become my children." Then St. Agabius told them, "I desired to see St. Macarius in the flesh, but I have seen him in the spirit. After my departure, you should go to him in peace."

God granted them the gift of healing the sick. Their report was heard in all the countries, especially among the sea merchants and the travellers. They learned the trade of making ships' sails, and they were able to support themselves with money earned from selling them, and they gave the rest to the poor and the needy.

One day, one of their father's stewards saw a ship with the names "Maximus and Domatius" on its sail . He inquired of the owner of the ship about these names. The owner told the steward, "These are the names of two monk brothers, which I have written on my ship as a blessing, so that God with their prayers may prosper my business." He described the brothers to him, as one with a full beard, and the other without a beard. The steward recognized them and he took the man and brought him before the Emperor. When the Emperor made certain about what he had heard, he sent their mother and the princess, their sister, to meet them. When the women met with the two saints and recognized them, they wept. Their mother wanted them to return with her, but the Saints refused, and they comforted the hearts of their mother and sister.

After a while, the Patriarch of Rome departed, and they remembered Maximus, whom they wanted to ordain in his place. His father rejoiced when he heard this. When the news arrived to St. Maximus and his brother, they remembered the command of their father Anba Agabius. They disguised themselves, and took the road along the Mediterranean sea shore, and when they were thirsty, God transformed for them the salty water into sweet water. They became very tired of walking, and their feet were bleeding. They slept on a hill because of their exhaustion and God sent them a certain power that carried them to the wilderness of Scetis where St. Macarius was residing. They told St. Macarius that they wanted to live under his guidance. When St. Macarius saw that they were of rich background, he thought that they would not be able to live in the desert because of its harsh living conditions. They answered him saying, "If we are not able to live here, our father, we will return to where we came from." Then he taught them how to plait palm leaves, and he helped in building a cave (cell) for them. He also told them about someone who would take the work of their hands to sell and bring them back bread.

They lived in this manner for three years, never communicating with anyone. They only went to church to partake of the Divine Sacraments silently. St. Macarius marvelled, for they did not go to him all these years. He prayed to God to reveal to him their secret. He went to visit them in their cell where he stayed the night with them. When he woke up at midnight, as was his custom, to pray, he saw the two saints praying and a ray of light going from their mouths to heaven, and the devils were all around them like flies, and the angel of the Lord standing with a sword of fire to protect them. The next day, St. Macarius put on them the holy Eskiem, and asked them to pray for him. They bowed to the ground before him (made metanias) in silence.

When they completed their course, and the Lord wanted to take them away from the sorrows of this temporal world, St. Maximus became sick. He sent word to St. Macarius, asking him to come. When St. Macarius arrived, he found St. Maximus ill with a fever, and he comforted him. St. Macarius saw a company of prophets and saints, including St. John the Baptist and Emperor Constantine, gathered around the Saint until he delivered his pure spirit in dignity and in honor. St. Macarius wept and said, "Blessed are you, O Maximus."

On this day also, of the year 1826 A.D., Anba Yusab, the great scholar and honorable father, departed. He was the Bishop of Girga and Ekhmiem, and was known by the name "El-Abbah". He was born in the town of Nekhila in Upper Egypt, to rich parents who were compassionate to the poor and the needy. When Anba Yusab was 25 years old, his parents wanted him to be wed, but he refused. Because of his inclination towards the monastic life, he went to the estate of St. Anthony's monastery in the city of Boash. He stayed there for some time, during which his humility and piety were evident. This convinced the abbot to send him to the monastery. When he arrived, the monks received him with joy, for they had heard of his virtues and his knowledge of the Holy Scriptures. Shortly after, they clothed him in the monk's tunic.

When the reports of this father reached Pope John, 17th Patriarch, he called Anba Yusab and kept him with him. After the Pope verified what he heard of Anba Yusab' righteousness and knowledge, he counseled with the bishops who agreed to ordain Anba Yusab a bishop over Ekhmiem and Girga. Anba Yusab refrained from accepting this rank because of its responsibilities; however, he was ordained against his will.

When he arrived at his diocese, Anba Yusab found many heretics mingled with his people. He built a church, and made a great effort to gather his flock, to teach them, to restore those who were lost, and to guide many of the heretics to the faith. He wrote several articles on the Incarnation of the Lord Christ and explained several difficult issues and ambiguous verses in the Bible. He urged his people to forsake all the bad customs that they were engaged in, both inside and outside the church. He succeeded in putting an end to the quarrels and divisions from those who were in opposition to the truth. He was merciful to the poor, and never judged anyone by his appearance. He was fair in judgement, never took sides, and did not accept bribes. He sent whatever money he had left to his brethren, the monks, in their monasteries. He did not own anything except the clothes that he wore and those things which fulfilled his basic needs. He never uttered anything but the truth, and was not afraid of the mighty rulers of the land. He shepherded his flock with the best of care.

When God wanted to take him away from this world, Anba Yusab became ill for a short period of time. While he was sick, he stayed some time in his diocese, and then in the cell of Pope Anba Peter, 19th Pope. Then he went to his monastery in the wilderness. The monks rejoiced to see him, and his blessed life ended there, and he gave his pure spirit into the hand of the Lord who loved him. He lived 91 years, 25 years before his monastic life, 31 years in the monastery, and 35 years as bishop.