Toba 18 : The Departure of St. James, Bishop of Nisibis. 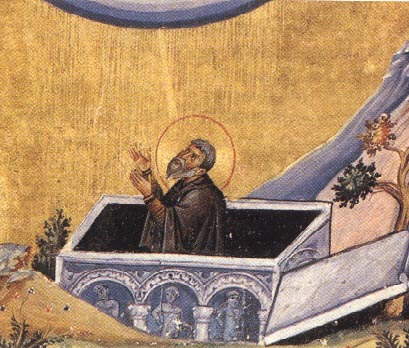 The Departure of St. James, Bishop of Nisibis.

On this day of the year 338 A.D., St. James, Bishop of Nisibis, departed. He was born in the city of Nisibis, and was brought up there. He was Syrian by race.

Early in his youth, he chose the monastic life. He wore sackcloth made of hair to protect him from the heat of summer and the cold of winter. His food was composed of the vegetation of the earth, and his drink was only water. For this reason, he was very thin, but his soul was illumined and full of grace. He was worthy to receive the gift of prophecy and the performing of miracles. He also was able to foretell the future and he advised the people of what would happen to them in advance.

Another miracle occurred when he was passing by certain people who stretched a man on the ground and covered him as though he was dead. They asked the saint for some money for his burial. When they returned to the man, they found him dead. They came back to the saint and repented for what they had done. St. James prayed to God, and the man came back to life.

When his virtues became widely known, he was chosen to be a bishop over the city of Nisibis. He shepherded the flock of Christ very well, and protected his people from the Arian wolves. He was one of the bishops who attended the first Universal Council at Nicea in 325 A.D., and agreed on the excommunication and exile of Arius.

When Shapur, the Persian King, came and surrounded the city of Nisibis with his army, God, in answer to the prayer of St. James, brought swarms of mosquitoes and wasps over their horses and elephants which caused a great stampede and the animals fled away. The King of Persia then became fearful, and he fled with his army and the siege was ended.

When the saint completed his good course, he departed in peace.