Toba 2 : The Departure of St. Theonas, 16th Pope of Alexandria and the Martyrdom of St. Callinicus (Gallinicus), Bishop of Oseem.

1. The Departure of St. Theonas, 16th Pope of Alexandria.

On this day in the year 300 A.D., St. Theonas, 16th Pope of Alexandria, departed. This saint was a righteous, meek scholar, gentle and loving to everyone. By the spirit of friendship and gentleness with everyone, he was able to build a church in Alexandria, dedicated to the name of the Virgin St. Mary, the Theotokos.

Until his time, the faithful were praying and performing their services in homes and in caves for fear of the unbelievers. Pope Theonas dealt with them wisely and gently to achieve what he wanted to do. He converted many of them to believe in the Lord Christ and baptized them.

He baptized, in the first year of his papacy, St. Peter, who succeeded him on the apostolic throne of St. Mark and was the 17th Pope. It was said that he ordained St. Peter as a reader at the age of five, then he promoted him to be a deacon at the age of twelve, then as a priest at sixteen.

At the time of this saint, a man by the name of Sabellius appeared in Alexandria who was teaching that the Father, the Son, and the Holy Spirit are one person. St. Theonas excommunicated him and he invalidated his heresy by convincing proof.

When he completed his course, he departed in peace, after he had been on the throne of St. Mark for 19 years. 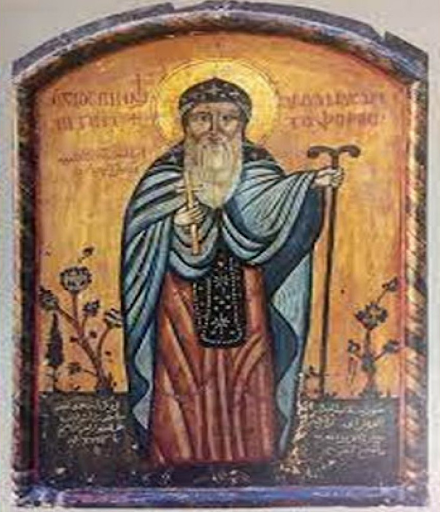 Also on this day, St. Callinicus (Gallinicus), bishop of Oseem, was martyred.

When Emperor Diocletian heard the report that St. Callinicus was teaching the people to get away from the worship of idols, he sent envoys to seize him and torture him. When the saint heard about the envoys of the Emperor, he called the people of his diocese to the City of Oseem. He celebrated the Divine Liturgy and after he administered the Body and the Blood of Christ to them, he told them, "You will not see my face again." The people wept bitterly, but they could not prevent him from delivering himself to the Emperor's envoys. They took him and delivered him to Arianus, Governor of Ansena (Antinoe). He tortured him, with different kinds of tortures, but the Lord healed him and strengthened him. The Governor took him to the city of "Edku", and there he tortured him again. When the Governor became weary of torturing the Saint, ordered that the Saint's arm be split down to his hand.

Subsequently, he took him in a ship to the city of "Tukh". When the saint felt, while he was on the ship, that the time of his departure from the world had drawn near, he commanded one of the sailors who was a believer, "If I die, when we arrive ashore, cast out my body on a hill."

When St. Callinicus departed, the sailor did as he was commanded. Some believers, through a command of God, came and took the body of the saint and shrouded it for burial and hid it in their homes until the end of the era of persecution.

His prayers be with us and Glory be to our God forever and ever. Amen.