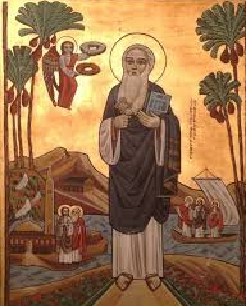 1. The Departure of St. Prochorus, One of the Seventy Disciples.

On this day, St. Prochorus departed. He was one of the seventy disciples who were called by the Lord and sent to preach His Name, and granted the gift of healing and casting out of evil spirits. St. Prochorus was with the disciples in the Upper Room on the day of Pentecost, and he was filled with the grace of the Holy Spirit, the Comforter. He was chosen by the Apostles to be one of the seven deacons, who were filled with the Holy Spirit and with wisdom. (Acts 6:5)

He accompanied St. John the Theologian, and travelled with him to many cities. St. John laid his hand on him and ordained him bishop for Nicomidia in Bithinia. He preached the Name of the Lord Christ, and restored many Greeks to the faith, baptizing them and teaching them to keep the Commandments. After he built a church for them and ordained priests and deacons, he went to the surrounding cities. He preached to them and baptized many of their inhabitants, as he also preached to and baptized many of the Jews. He endured many afflictions and hardships because of his preaching of the Name of Christ.

When he completed his course, he departed at a well-advanced age, and received the eternal bliss.

This day also is the commemoration of the consecration of St. John "El-Koochy's" church, which was in the city of Rome, and the relocation of the saint's relics to it. He was known as the owner of the Golden Bible.

This day also is the commemoration of the martyrdom of St. Behna and St. Anba Kloag the priest.