Toba 23 : The Martyrdom of St. Timothy, the Apostle and the Departure of Pope Cyril IV (Kyrillos), 110th Pope of Alexandria. 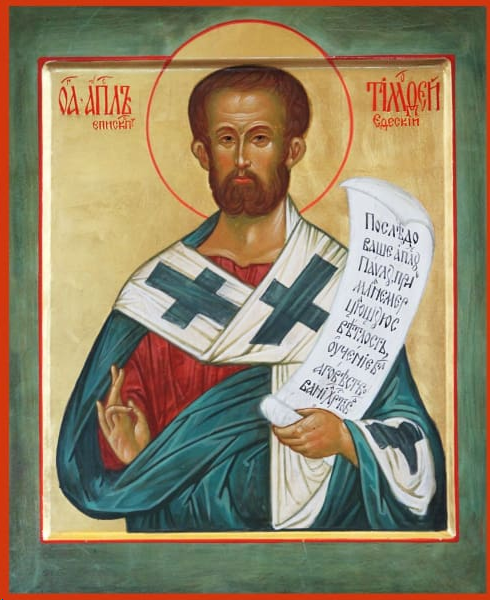 1. The Martyrdom of St. Timothy, the Apostle.

On this day, of the year 97 A.D., St. Timothy, the Apostle, was martyred. He was born in the city of Lystra of the district of Lycaonia in Asia Minor, to a Greek father who worshipped the stars and a Jewish mother whose name was Eunice. (Acts 16:1-2, Timothy 1:5)

When St. Paul preached in Lystra, this saint heard his teachings and saw the signs that God wrought by his hands. He believed and was baptized. Timothy rejected the gods of his father and forsook the faith of his mother. He became a disciple of St. Paul the Apostle, followed him in his travels, and shared his labors.

In the year 53 A.D., St. Paul ordained St. Timothy bishop over the city of Ephesus and the neighboring cities. St. Timothy preached there and converted many to the Christian faith and baptized them.

St. Paul wrote two epistles to St. Timothy: the first of which was in 65 A.D., and the second was shortly before 67 A.D., urging him, "Take heed to yourself and to the doctrine, continue in them, for in doing this you will save both yourself and those who hear you." (1Tim. 4:16) He also wrote to him about the qualifications of bishop, priest, deacon, and the widow. He cautioned him also about false prophets and commanded him not to lay his hand on one in haste but only after thorough examinations and testing.

St. Paul called Timothy his son and his beloved. St. Timothy delivered four epistles for St. Paul: the first was the Epistle to Corinth, the second to Philippi, the third to Thessalonica, and the fourth to the Hebrews.

St. Timothy shepherded the flock of Christ extremely well, and he illumined minds by his teachings, instructions, and admonitions. He continued to rebuke the Jews and the Greeks, therefore they envied him and congregated against him and started beating him until he was martyred in the city of Ephesus. The believers took his body and buried it.

On this day also, the great father Pope Kyrillos IV (Cyril), 110th Pope of Alexandria, departed. He was born in the town of Sawamaa of the district of the city of Girga, to righteous parents in the year 1816 A.D. They gave him the name David (Daoud) after his grandfather. His father brought him up and educated him well. He grew up despising the things of the world and its vanities. When he was 22 years old, he went to the monastery of St. Anthony, where he conducted himself virtuously and lived an ascetic life, which convinced the abbot of the monastery, Father Athanasius (El-Kalousni), to clothe him with the garb of the monks. He continued to read and to study the holy books.

He was very sharp intellectually and was very well versed in religious matters. When a problem transpired among the Ethiopians concerning some doctrinal issues, the Pope, Anba Petros called upon him to go to Ethiopia to solve these problems. He performed his duty admirably. Father Daoud returned on July 13, 1852, to find that Pope Petros had departed on April 15, 1852. When they tried to choose a successor to the Pope, there was a split in the people's opinions. Some wanted Father Daoud and others wanted to choose someone else.

Finally they decided to ordain Father Daoud an auxiliary bishop in the year 1853. He performed his duties as such, for a year and two months, during which, he showed discretion and good conduct, that made him worthy to be chosen patriarch on the 28th of Bashanse of 1571 A.M. (1854 A.D.).

Generally, the progress of the Copts at that time attributed to his efforts. He demolished the old church in the Patriarchate and built another, but he could not complete it because of his absence in Ethiopia for the second time.

This great pontiff upheld the canons of the church, and was charitable to the poor and the needy, and was deeply loved by his flock. He departed on the 23rd of Tubah in 1577 A.M. (1861 A.D.)