Toba 4 : The Departure of St. John the Evangelist and Theologian 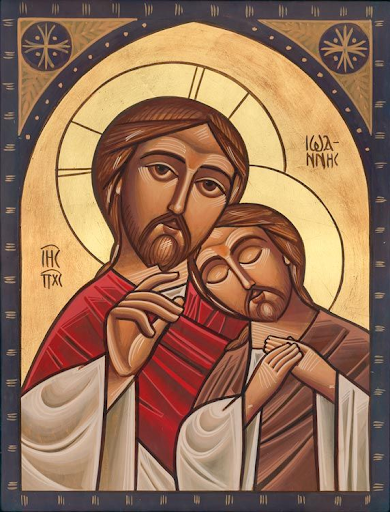 The Departure of St. John the Evangelist and Theologian.

On this day, in the year 100 A.D., St. John, the virgin, the evangelist, and apostle who was the son of Zebedee, departed. St. John Chrysostom (of the Golden Mouth) said that St. John the Evangelist was originally a disciple of St. John the Baptist. He was the brother of St. James the Elder, who was killed by Herod by the sword. The Lord called him with his brother "Boanerges" (Mark 3:17), that is "sons of thunder," for their strong zeal and great faith. He was also the disciple whom Jesus loved.

The lot fell on him to go to Asia. The people of this area were stiff-necked, so he prayed to Christ to be with him. He went to Ephesus, accompanied by his disciple Prochorus. They embarked on a ship, but the ship was wrecked on the way and every one of the passengers clung to a plank of the ship's wood. The waves washed out Prochorus to an island, but St. John remained among the waves of the sea for several days, until the waves carried him, by the will of God, to the same island where his disciple Prochorus was. When they met together, they offered thanks to God for taking care of them.

From there, St. John went to the city of Ephesus where he preached the word of salvation. Its people did not accept his message at first, until a day when an only child fell in the furnace of a public bath managed by the child's mother. They took him in haste out of the fire, but he was dead and his mother wept bitterly. At this time, St. John went to the child, prayed fervently to God, made the sign of the Cross over him, breathed in the child's face, and life came back to him right away. His mother rejoiced and she kissed the feet of the Apostle and tears of joy were in her eyes. From this time on, the people of the city came to hear his teachings and many of them believed and were baptized by St. John. This made the priests of the idols resent him and they tried to kill him several times but they could not, for the Lord protects all His chosen ones. After a great effort and many hardships, St. John led them to the knowledge of God and ordained bishops and priests for them.

From there, he went to other places in Asia (Minor) and converted many of its people to the Faith of Christ.

This saint lived 90 years, and they used to carry him to the gatherings of the believers. Because of his old age, he only gave them very short sermons saying, "My children, love one another." He wrote the gospel known after him, and the Book of Revelation which he had seen on the island of Patmos, which is full of divine mysteries. He also wrote the three epistles known by his name.

He was with the Lord Jesus Christ at the Transfiguration. He leaned (reclined) on the chest of our Lord at the Last Supper. He asked the Lord, "Who is he that shall betray you?" He was standing near the Cross with the Virgin St. Mary and the Lord said to his mother, "Behold your Son," and to John, "Behold your mother." He was the disciple about whom Peter asked the Lord, "And this one, what of him?" The Lord said to Peter, "If it be that I wish him to be here until I come, what is that to you?"

When St. John felt that he was about to depart from this world, he summoned the people and administered to them the Body and the Blood of the Lord. He preached and commanded them to be steadfast in their faith.

He then departed from the City of Ephesus for a short distance. He commanded his disciple and others with him to dig there a pit for him. He went down in it, raised his hands and prayed and then bade them farewell. He commanded them to return to the city and to confirm the brethren in the faith of the Lord Jesus Christ, and said to them, "I am innocent of your blood, for I did not leave any command of God that I haven't taught you, and now, let it be known that you will never see my face again, and God will reward everyone according to his deeds."

When he said that, they kissed his hand and his feet, and they left him and returned to the city. When the people knew what had happened, they went out to where the saint was, and they found that he had departed. They wept and were deeply sad. They talked about his miracles and marvelled about his meekness.

In spite of the fact that he did not die by the sword, as the rest of the apostles did, he was equal to them in the heavenly glories, for his virginity and his holiness.