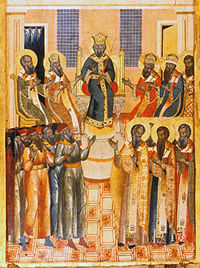 1.The Commemoration of the Ecumenical Council in Constantinople.

On this day of the year 381 A.D., one hundred and fifty fathers assembled upon the order of Emperor Theodosius the Great, in the city of Constantinople. They assembled to judge Macedonius, Patriarch of Constantinople, and Sabellius and Apollinaris, for their blasphemy against God the Word and the Holy Spirit.

When this blasphemy became widespread, the fathers of the church were concerned about the peace of the church, and made these heresies known to Emperor Theodosius. He ordered that a council be assembled, and invited Abba Timothy, 22nd Pope of Alexandria; Abba Damasus, Pope of Rome; Abba Petros (Peter), Patriarch of Antioch; and Abba Cyril (Kyrillos), Patriarch of Jerusalem. They came to the council with their bishops, except the Pope of Rome, who delegated others to attend on his behalf.

When the holy council convened in Constantinople, they called upon Macedonius. Abba Timothy, Pope of Alexandria, who was presiding over the council, asked him, "What is your belief?" Macedonius answered that the Holy Spirit was created like any other creature. Abba Timothy said, "The Holy Spirit is the Spirit of God. If we say as you claim that the Spirit of God is created, we are saying, in essence, that His Life is created, and therefore, He is 'lifeless' without it." He advised Macedonius to renounce his erroneous belief. When he refused, Macedonius was excommunicated, anathematized and striped of his rank.

Then Abba Timothy asked Sabellius, "And you, what is your belief?" He answered, "The Trinity is one being and one person." Abba Timothy said, "If the Trinity is as you claim, then the mentioning of the Trinity is groundless, and your baptism is futile, because it is in the Name of the Father, the Son and the Holy Spirit, and the Trinity would have suffered pain and died, and the saying of the gospel would be invalid, when it is said that the Son was in the Jordan River, and the Holy Spirit descended upon Him in the likeness of a dove, and the Father called upon Him from heaven." Then Abba Timothy advised him to renounce his belief. When Sabellius did not accept, Abba Timothy excommunicated, anathematized and striped him of his rank.

Then Abba Timothy asked Apollinaris, "And you, what is your belief?" Apollinaris said, "The Incarnation of the Son was by His union with the human flesh without the rational being, for His divinity replaced the soul and the mind of the human being." Abba Timothy replied, "God the Word united with our nature to save us, therefore if He only united with the animal body, then He did not save mankind but the animals. Humans will rise on the day of Resurrection with the rational and speaking soul with which there will be the communication and the judgement, and with it they will be granted the blessing or the condemnation. Accordingly, the Incarnation would be in vain. If that was the case, why did He call Himself a man if He did not unite with the rational speaking soul?" Then Abba Timothy advised him to turn away from his erroneous belief, but he also refused. He excommunicated Apollinaris as he did the other two friends.

Ultimately, the council excommunicated these three and all those who agreed with them. Then they completed the creed that was established by the fathers at the Council of Nicea until its saying, "Of Whose Kingdom shall be no end." The fathers of the Council of Constantinople added, "Truly we believe in the Holy Spirit, the Lord, Giver of Life... to the end." They put down many canons that are still in the hands of the believers today.

The prayers of these holy fathers be with us. Amen.

On this day also, we celebrate the commemoration of the consecration of the Church of St. Peter, 17th Pope of Alexandria and the Seal of Martyrs. He was martyred in Alexandria during the last days of the reign of Diocletian the Infidel.

When Emperor Constantine the Great reigned, and all the idol temples were destroyed, churches were built. So the believers built this church west of Alexandria in the name of St. Peter, the Seal of Martyrs. The church existed till shortly after the reign of the Arabs over Egypt, when it was destroyed.

His blessings be with us and glory be to our God forever. Amen.