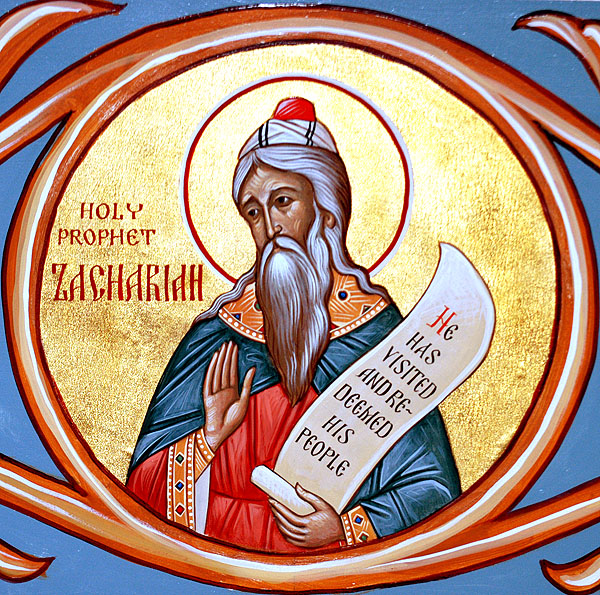 1. The Departure of St. Zechariah, the Prophet.

On this day St. Zechariah the Prophet, the son of Berechiah, one of the twelve minor prophets, departed. He was from the tribe of Levi, born in the land of Gilead, and was exiled to the land of the Chaldeans.

In exile, he started to prophesy, in the second year of King Darius, 520 B.C. He prophesied about "Jeshua, the son of Jozadak," and "Zerubbabel, the son of Shealtiel," that they would rebuild the temple. (Ezra 5:1; 6:14)

He prophesied also about the entrance of the Lord to Jerusalem riding a donkey, the foal of a donkey (Zechariah 9:9); the thirty pieces of silver that Judas Iscariot received to deliver his Master to the Jews (Matthew 26:14-15); the scattering of the disciples on the night of the crucifixion; the coming of Christ in glory; and the grief of the children of Israel who did not believe in Him (Zechariah 12:10). He also prophesied about many other things.

He was the prophet who was killed between the altar and the temple. He was buried in Jerusalem in the tomb of the prophets.

2. The Consecration of the First Church Dedicated for the Forty Martyrs of Sebaste.

On this day also is the commemoration of the consecration of the church of the forty martyrs from Sebaste by the hand of Emperor Licinius. It was the first church that was built after their names. St. Basil the Great consecrated it, wrote their biographies and established a great feast day for them.

Their intercession be with us. Amen.

On this day also, the ascetic St. Paphnoute (Paphnotius) departed. He became a monk at a young age, and followed the hardest way in his monastic life.

God inspired him to travel to the inner wilderness, and there he saw many hermits and anchorites and St. Paphnoute wrote about them. Among those was St. Timothy and St. Abu Nofr. In his travels, he suffered much hunger and thirst, but the angel of the Lord appeared to him often to strengthen him. When he finished his strife, he departed in peace.