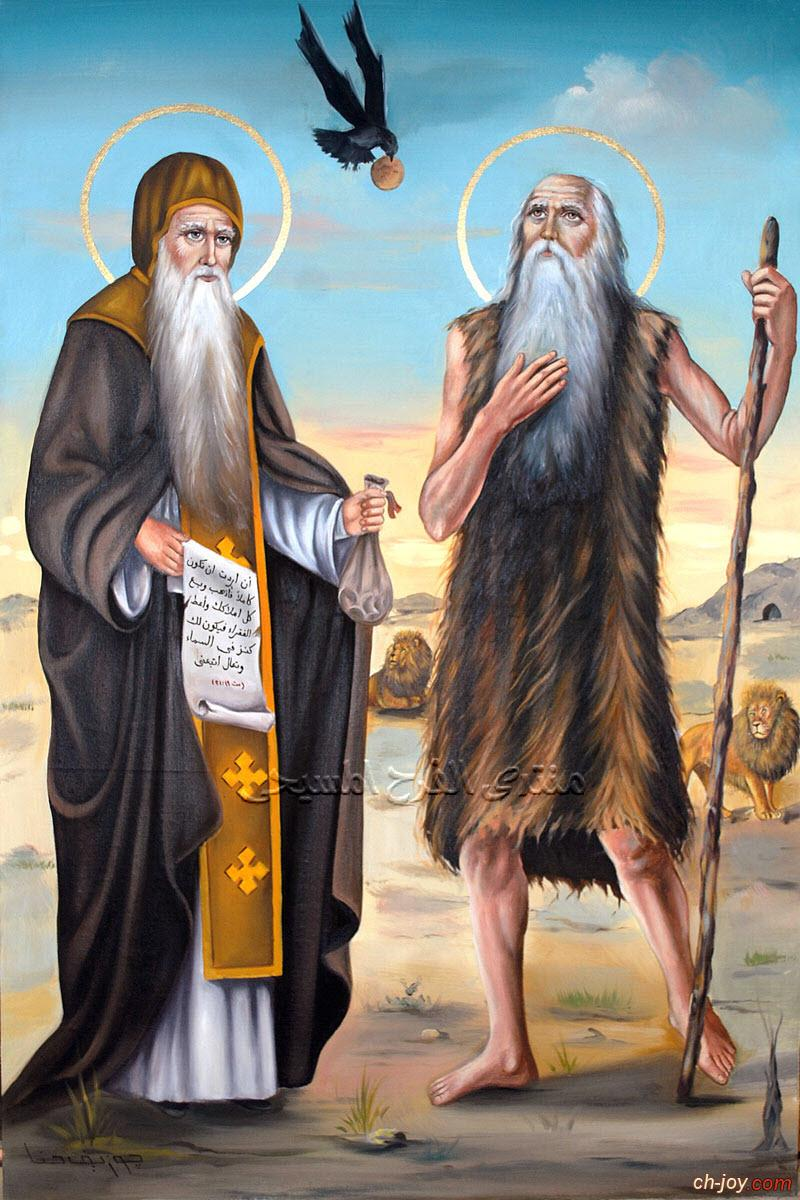 1. The Departure of the Great Saint Anba Paul, the First Hermit.

On this day of the year 341 A.D., the great saint Anba Paul, the first hermit, departed. This Saint was from the city of Alexandria, and had a brother whose name was Peter.

After the departure of their father, they divided the inheritance between them. When his brother took the greater share, Paul's feelings were hurt, by his brother's action. He said to his brother, "Why don't you give me my rightful share of the inheritance of my father?" Peter responded, "You are a young man, and I am afraid that you might squander it. As for me, I will keep it for you."

When they did not agree with each other, they went to the governor to judge between them. On their way, they saw a funeral procession. Paul asked one of the mourners about the deceased man. Paul was told that he was one of the noble and rich people of the city, and that he left his riches and his wealth behind, and that they were taking him to bury him with only his garment.

St. Paul sighed in his heart and said to himself, "What do I have to do then with all the money of this temporal world which I shall leave naked?" He looked to his brother and said to him, "My brother, let us return, for I shall not ask you for anything, not even for what is mine."

On their way back, Paul left his brother and went on his way until he came out of the city. Paul found a grave where he stayed for three days praying to the Lord Christ to guide him to what pleases Him. As for his brother, he searched for Paul diligently and when he did not find him, he was very sorry for what he had done.

God sent St. Paul an angel who took him out of this place, and walked with him until they reached the eastern inner wilderness. He stayed there for 70 years, during which he saw no one. He put on a tunic made of palm tree fiber. The Lord sent him a raven every day with a half loaf of bread.

When the Lord wanted to reveal the holiness of St. Paul and his righteousness, He sent His angel to St. Antony (Antonius) the Great, who thought that he was the first to dwell in the wilderness. The angel told St. Antony, "There is a man who lives in the inner wilderness; the world is not worthy of his footsteps. By his prayers, the Lord brings rain and dew to fall on the earth, and bring the flood of the Nile in its due season."

When St. Antony heard this, he rose right away and went to the inner wilderness, a distance of one day's walk. God guided him to the cave of St. Paul. He entered, and they bowed to each other, and sat down talking about the greatness of the Lord.

In the evening, the raven came bringing a whole loaf of bread. St. Paul said to St. Antony, "Now, I know that you are one of the children of God. For 70 years, the Lord has been sending to me everyday, half a loaf of bread, but today, the Lord is sending your food also. Now, go and bring me back in a hurry the tunic that Emperor Constantine had given to Pope Athanasius."

St. Antony went to St. Athanasius, and brought the tunic from him and returned to St. Paul. On his way back, he saw the soul of St. Paul carried by the angels up to heaven. When he arrived to the cave, he found that St. Paul had departed from this world. He kissed him, weeping, and clothed him in the tunic that he asked for, and he took his fiber tunic.

When St. Antony wanted to bury St. Paul, he wondered how could he dig the grave? Two lions entered the cave, bowed their heads before the body of St. Paul, and shook their heads as if they were asking St. Anthony what to do. St. Antony knew that they were sent from God. He marked the length and width of the body on the ground, and they dug the grave with their claws, according to St. Antony's directions. St. Anthony then buried the holy body, and went back to Pope Athanasius and told him what had happened. St. Athanasius sent men to bring St. Paul's body to him. They spent several days searching in the mountains, but they could not find the place of his grave. St. Paul appeared to the Pope in a vision and told him that the Lord would not allow the revelation of the location of his body. He asked the Pope not to trouble the men, but to have them brought back.

Pope Athanasius used to put the palm fiber tunic on three times a year during the Divine Liturgy. One time, he wanted to let the people know about the holiness of the owner of that tunic. He put it over a dead man, and the dead man rose up instantly. The news of this miracle spread all around the land of Egypt.

2. The Departure of St. Longinus, Abbot of El-Zugag Monastery.

On this day also, the pure saint Anba Longinus, the abbot of the El-Zugag monastery, departed. He was from Cilicia (in Asia Minor). He became a monk in one of the monasteries, where his father Lucianus became a monk after his wife had died.

When the abbot of this monastery departed, the monks wanted to appoint St. Lucianus an abbot over them, but he refused, for he shunned the vain glory of the world.

He took his son Longinus and went to Syria, where they lived in a church. God revealed their virtues by performing many miracles through them. For fear of the vain glory of this world, Longinus went to Egypt with his father's permission.

When he arrived, he went to the monastery of El-Zugag, west of Alexandria. The monks received him with joy. After the departure of the abbot, the monks appointed Anba Longinus abbot over them, for what they saw of his virtues and his good conduct. Shortly after, his father Lucianus came to him, and they worked together in making the canvas sails of boats, and sold them to support themselves. God performed many miracles and signs on their hands.

Father Lucianus departed from this world in peace, and shortly after, his son, Anba Longinus, departed also.

The prayers of these two saints be with us, and Glory be to our God forever. Amen.