Amshir 3 : The Departure of St. James, the Ascetic. 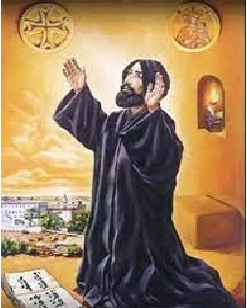 The Departure of St. James, the Ascetic.

On this day, St. James, the ascetic monk, departed. This father denounced the world since his childhood. He dwelt in a cave for 15 years, during which he struggled with long fasting and numerous prayers. He did not leave his cave all this time.

Some followers of the evil one plotted against him, and they sent him a harlot. She decorated herself and went and entered his cave. She tried to get closer to him and flirted with him to entice him to commit sin with her. But he preached to her, and reminded her of the fire of hell, and the eternal punishments. She repented on his hand and went back to the city, thanking God, Who had compassion on her and brought her back from the way of eternal death to the way of eternal life.

God performed many miracles through him. When he finished his good struggle in this life, he departed in peace.