Amshir 4 : The Martyrdom of St. Agabus, One of the Seventy Disciples. 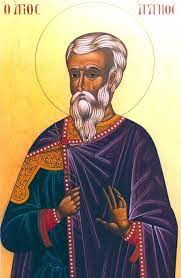 The Martyrdom of St. Agabus, One of the Seventy Disciples.

He received the gift of prophecy, as the Acts of the Apostles tells us, "And as we stayed many days, a certain prophet named Agabus came down from Judea. When he had come to us, he took Paul's belt, bound his own hands and feet, and said, 'Thus says the Holy Spirit, so shall the Jews at Jerusalem bind the man who owns this belt, and deliver him into the hands of the Gentiles.'" (Acts 21:10-11) This prophecy was fulfilled. (Acts 21:17-36)

He also prophesied about a famine on all the earth, and this was fulfilled during the time of Claudius Caesar, the Roman Emperor. (Acts 11:27-28)

He preached the gospel together with the holy apostles. He went to many countries, teaching and converting many of the Jews and the Greeks to the knowledge of the Lord Christ. He sanctified them by the life-giving baptism.

This moved the Jews of Jerusalem to arrest him, and they tortured him by beating him severely, and putting a rope around his neck, and they dragged him outside the city. They stoned him there until he gave up his pure spirit. At this moment, a light came down from heaven. Everyone saw it as a continuous column between his body and heaven. A Jewish woman saw it and said, "Truly this man was righteous." She shouted in a loud voice, "I am a Christian and I believe in the God of this saint." They stoned her also and she died and was buried with him in one tomb.

Their prayers be with us and glory be to our God forever. Amen.