Toba 24 : The Departure of St. Mary the Ascetic (The Shut-In) and the Martyrdom of Anba Bisada (St. Psati), the Priest.

1. The Departure of St. Mary the Ascetic (The Shut-In).

On this day, St. Mary the Ascetic, the shut-in, departed. Her parents were among the wealthy and noble people of Alexandria. Several of the sons of the great men in the city asked to marry her, but she declined.

When her parents departed, she distributed all that they left among the poor, keeping just a modest part for herself. Then she joined a convent near the City of Alexandria, and wore the monastic garb. She exerted herself in worship for 15 years, then she put on the holy "Eskeem" and put on a garb made of hair. After she took the permission of the abbess, she shut herself in her cell, closed the door, and opened a small window in it to receive her provisions. She spent 22 years in this cell, fasting two days at a time. During the holy forty days fast (Lent), she fasted for three days, and then broke her fast on some pulses moistened with water.

On the 11th day of the month of Tubah, she asked for a little of the holy water. She washed her hands and feet, then she received the Holy Communion, and drank from the holy water. She became sick and stayed in her bed until the 21st of Tubah, when she received the Holy Mysteries once more. She called upon the abbess and all the sisters, bade them farewell, and asked them to visit her after three days. On the 24th day of Tubah, they visited her and found that she had departed in peace. They carried her to the church, and after praying over her, they placed her with the bodies of the virgin saints. 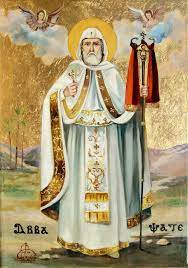 On this day also, St. Bisada (St. Psati) was martyred. His father was from El-Kase and his mother, who was the daughter of one of the pagan priests, was from Ehreet. She was a believer in the Lord Christ. When the son of a pagan priest asked her to marry him, she took flight to El-Kase where she married a farmer, and God gave her a son whom she called Bisadi.

They brought him up in the fear of the Lord and in the keeping of His Commandments. When St. Bisadi was twenty years old, his father departed and left him a great wealth. St. Bisadi increased in the deeds of charity and righteousness.

When Emperor Diocletian issued his decree of worshipping the idols, the saint hid himself in his home, and continued to worship God. A voice came to him from heaven saying, "Why are you delaying?" Immediately, he rushed to the governor and confessed his faith saying, "I am a Christian."

The Governor ordered him be tortured by beating with whips, hitting his head with pins, pulling out his nails, and dipping his fingers in vinegar and lime. He endured the torture for several days with great patience, and the Lord Christ healed all his wounds.

St. Julius El-Akfahsi (who wrote the biographies of saints) took his body and gave it to his mother who was present. She returned with the body to her home town, Ehreet, and all the people of the town received the body of St. Bisadi with joy, and buried him with great honor. They built a church after his name, and the Lord performed many miracles through his body.