Toba 26 : The Martyrdom of the Forty-Nine Saints, the Elders of Sheheat (Scetis) & he Departure of St. Anastasia. 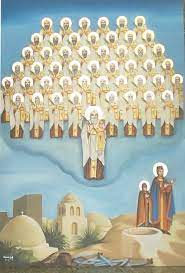 1. The Martyrdom of the Forty-Nine Saints, the Elders of Sheheat (Scetis).

On this day, the forty-nine elder priests of Sheheat, Martinos, the envoy of the emperor, and his son, were martyred.

Emperor Theodosius the Less, the son of Emperor Arcadius, did not have a son. He wrote to the elders of Sheheat asking them to pray to God to grant him a son. St. Isidor wrote back to him saying that God did not will for him to have a son who would participate with the heretics after him.

When the Emperor read the message, he offered thanks to God. Some people gave him the advice to marry another wife to have offspring from her to inherit the empire after him. He said to them, "I cannot do anything except what the elders of Sheheat demanded." He sent an envoy whose name was Martinos to consult with them about that. Martinos had a son named Zius who accompanied him on his visit to the elders in order to receive their blessings.

When they arrived and the elders read the message, they took the messenger to the body of St. Isidor, for he had departed. They called on him saying, "Our father, we have received a letter from the Emperor. What shall we say to him?" A voice came from the pure body saying, "What I had said before, I also say now, that the Lord will never give him a son to participate with the heretics, even if he marries ten women." The elders wrote back to the Emperor recounting what they heard.

When the messenger wanted to return, the pagan berbers attacked the monastery. One of their great elders, whose name was Anba Yuannis, called upon the brethren and said, "The berbers have come to kill us. Whoever amongst you would like to become a martyr, let him stand, and whoever is afraid, let him hide in the palace." Some of them hid in the palace, but he remained with the forty-eight elders, who were all slaughtered by the berbers.

Martinos and his son were hiding. The son looked up and saw the angels placing the crowns of glory on the elders who were killed. The son said to his father, "I see spiritual beings putting crowns on the heads of the elders. I shall go to receive a crown like them." His father replied, "And I also shall go with you, my son." Both revealed themselves to the berbers. They were killed and received the crown of martyrdom.

After the berbers had gone, the monks who were hiding in the palace came down, took the bodies, and placed them in a cave. They sang and said praises before the cave every night. Some people from the city of Batanoon came and took the body of Anba Yuannis and returned to their city. The elders of the monastery returned the body after a while. Also, some people from El-Fayyoum came and stole the body of Zius, the son of Martinos. When they arrived at the lake of El-Fayyoum, the angel of the Lord returned him to where the body of his father was. The elders also tried to separate the body of Zius, the son, from the body of his father several times, but they could not. Every time they moved the body of Zius, the angel of the Lord would return it to its place. One of the fathers heard one night, in a vision, someone saying, "Praise God, we were not separated in the flesh, nor are we separated when we are with Christ. Why do you want to separate our bodies?"

When persecution became rampant and the attacks on the monastery continued, the fathers relocated the bodies, to a cave which they built beside the church of St. Macarius. At the time of Anba Theodosius, 33rd Pope of Alexandria, they built a church for them. When Anba Benjamin, 38th pope, came to the wilderness, he established a feast day for them on the 5th day of Amshir, which was the day of the relocation of their bodies to this church.

In time, the church building deteriorated, and they moved the bodies to one of the cells until the time of Ibrahim El-Gohary, who built a church for them around the end of the 18th century, where they placed the bodies of the saints. The church is still in existence today in the monastery of St. Macarius.

The cell in which the bodies were kept is known today in Coptic as the cell of Ehme' Epseet, or the cell of the forty-nine.

2. The Departure of St. Anastasia.

On this day also, St. Anastasia departed. She was from a noble family in the city of Constantinople. She was very beautiful and had a great moral character.

Emperor Justin, who was married, wanted to marry her. She refused and went and told his wife. The Empress sent her to Alexandria on a private ship. She built her a convent outside the city of Alexandria and named it after her.

When the Emperor knew where she was, he sent for her, but Anastasia escaped and hid herself in the wilderness of Sheheat (Scetis), disguised as a prince. She met with Anba Daniel, the archpriest of the wilderness, and revealed her story to him. He brought her to a cave, and asked one of the elders to fill a water pot for her once every week, and to place the pot at the door of the cave and leave. She remained in this place for 28 years, without anyone knowing that she was a woman. She used to write her thoughts on pieces of pottery, and leave them at the door of her cave. The elder who brought her the water used to take the pieces of pottery without knowing what was written on them and give them to St. Daniel.

One day he brought a piece of pottery to St. Daniel who wept when he read it, and said to his disciple, "Come with me now to bury the body of the saint in that cave." When they entered her cave, they received blessings from each other. St. Anastasia said to Anba Daniel, "For the sake of God, bury me with what I have on my body." Then she prayed and bade them farewell and departed in peace. They wept and buried her. When the disciple was caring for her burial, he found out that she was a woman, and he marvelled in silence.

After they buried her, and they returned to their place, the disciple knelt before St. Daniel and said, "For the sake of God, tell me her story, for I have seen that she was a woman." The elder told him her story, that she was from one of the noble families of Constantinople, and how she surrendered herself to Christ, forsaking the vain glory of this world.

Her prayers be with us and Glory be to our God forever. Amen.