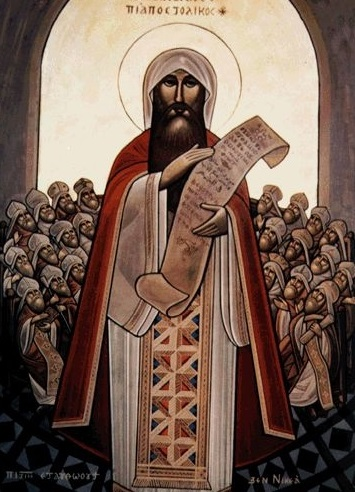 1. The Martyrdom of St. Sarapion.

On this day, St. Sarapion was martyred. He was a native of the City of Binosah (Babousah), a town of Lower Egypt. He was wealthy, had many possessions, and he was also a charitable man.

At the time of the persecution, he heard that the governor of Alexandria, Armanius, had arrived in Lower Egypt, the northern part of the country, to torture the Christians. He went out with his friend, Theodore and another friend who was a shepherd called Thomas. They all confessed the Name of Christ before the Governor, who cast them into prison.

When the people of his town heard about his arrest, they came carrying arms to kill the Governor and to free the saint. The saint constrained them and told them that he wanted to be martyred in the name of Christ and they went away.

The Governor took the saint with him to Alexandria on a ship, and there he tortured St. Sarapion with the pressing wheel (Hinbazin), and threw him in a ditch filled with fire. Then he put him in a cauldron full of pitch and bitumen and lit fire under him. Through it all, the Lord was with him and delivered him safely. At last they crucified him and threw arrows at him.

The angel of the Lord came and brought St. Sarapion down, and crucified the Governor in his place. They continued to throw arrows at the Governor as if he was the saint, while he was crying and saying, "I am Armanius." The saint said to the Governor, "The Lord God lives, you will not be brought down from the tree, until you bring out those who are in prison and spread the accounts of their struggle." The Governor did as the saint told him. The number of martyrs that were beheaded on that day was 540 souls.

Then the Governor gave the responsibility of torturing the Saint to one of the princes, whose name was Orion. He traveled with the saint by sea to his own town. At night the ship was ashore at one of the villages, and they slept. In the morning, Orion found that the place where the ship was ashore was the town of the saint, and he marvelled, and he heard a voice saying, "This is his town, you should get him out of the ship."

After they had tortured the saint, they beheaded him, and he received the crown of martyrdom. Orion wrapped the body of the saint in his tunic and delivered him to his family.

2. The Commemoration of the Archangel Suriel.

On this day also, the church commemorates the honorable Archangel Suriel. He was with Ezra, the righteous prophet, and instructed him about many hidden mysteries. He is also the intercessor on behalf of sinners.

His intercession be with us. Amen.

3. The Relocation of the Relics of St. Timothy, the Apostle.

On this day also, the church celebrates the commemoration of the transfer of the relics of St. Timothy, the Apostle, from the City of Ephesus to Constantinople.

They brought him up in the Christian faith. He grew up in the fear of God, merciful to the poor, and steadfast in prayer and fasting. His parents wanted him to get married, but he declined. When Emperor Diocletian reigned and knew that this saint did not raise incense to the gods, the Emperor sent to the governor Arianus to torture St. Abe-Fam if he did not offer incense to the idols.

Arianus went to Oseem and when he saw the saint he said, "Peace be with you," and the saint replied, "Why do you speak the word of peace? Did you not know that peace is only for the righteous?" and "there is no peace for the wicked, says the Lord." ( Isaiah 48:22) The Governor became extremely angry and took the Saint to Qaw where he tortured him severely, then beheaded him. The Saint received the crown of martyrdom. God honored this saint by performing many miracles through his body.