Amshir 26 : The Departure of St. Hosea, the Prophet and the Martyrdom of St. Zadok and the 128 who were with Him.

1. The Departure of St. Hosea, the Prophet.

On this day, St. Hosea, the prophet, one of the twelve minor prophets of Israel, departed. This righteous man prophesied during the days of Uzziah, Jotham, Ahaz and Hezekiah, kings of Judah, and in the days of Jeroboam, the son of Joash, King of Israel. (Hosea 1:1)

He mentioned in his prophecy some remarkable and marvelous things. He rebuked the children of Israel for their sins and their transgressions, and warned them in advance about the evil things that would befall them because of their offenses. He promised them the uplifting of these calamities if they returned to the Lord their God.

He also prophesied about the passions of our Savior, His resurrection and the salvation of the human race. He said, "He has torn, but He will heal us; He has stricken, but He will bind us up. After two days He will revive us; on the third day He will raise us up, that we may live in his sight. Let us know, let us pursue the knowledge of the Lord... " (Hosea 6:1-3)

He prophesied also about the abolishment of the sting of death and the dominion of hell by saying, "I will ransom them from the power of the grave, I will redeem them from death, O Death, I will be your plagues! O Grave, I will be your destruction." (Hosea 13:14) "O Death, where is your sting? O Hades, where is your victory?" (I Corinthians 15:55)

He departed at a blessed old age. 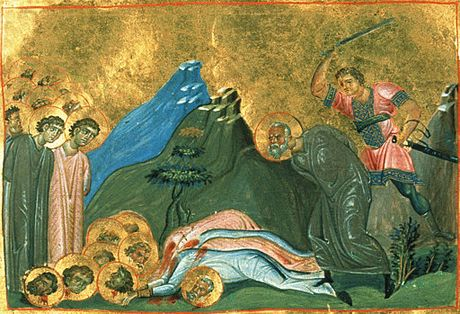 On this day also, St. Zadok and the 128 saints with him were martyred in Persia. Behram, King of Persia, brought them before him and ordered them to worship the sun. St. Zadok said to him, "I do not worship except God, the Creator of the sun and all the universe." The King asked, "Does this Sun have a god?" The saint replied, "Yes, and He is the Lord Christ, our God."

The King ordered him beheaded. The saint prayed and the executioner cut his head. A great light appeared and all those who were present saw it and cried, saying, "We are all Christians." The King ordered that their heads be cut off and they received the crown of martyrdom.