Amshir 28 : The Martyrdom of St. Theodore, the Roman. 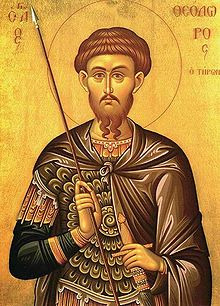 On this day St. Theodore (Theodoros), the Roman, was martyred. He was from the City of Astir (Peshotep) during the reign of the Emperors Maximianus and Diocletian. When they were informed that the saint did not adore their idols, they brought him and asked him to worship the idols but he refused.

They promised him precious gifts but he did not hearken to them. They tortured him by pressing his body in the Hinbazeen, and hacking parts of his body. He was burned with fire and beat him with whips. He endured all that because of his love for the Lord Christ Who sent His angels to comfort and strengthen him. Finally he was beheaded and received the crown of martyrdom.