Baramhat 1 : The Departure of St. Narcissus, the Martyrdom of St. Alexandrus and Commemoration of Anba Marcura.

1. The Departure of St. Narcissus.

On this day of the year, 222 A.D., departed the father St. Narcissus, Bishop of Jerusalem. This father came to Jerusalem during the reign of Alexander Caesar, who loved the Christians, in the year 190 A.D. This father was holy and unblemished in all his conduct. He shepherded his people with the best of care. Later, Alexander died and after him Maximianus Caesar reigned who incited persecution against the Christians. He slew many of the bishops and the remaining fled leaving their parishes. God granted this father the gift of performing wonders. On the eve of the feast of Easter, the oil in the lamps ran out, so he ordered the lamps to be filled with water and were lit. They all illuminated that night also by the light of his teachings.

The enemy of the good did not stop but, moved some people against him. They accused him of committing the sin of infidelity. God's punishment for those liars was bitter. One of them burned to death, and the bowels of another poured out and died, the body of the third wasted out from a long sickness, the fourth was killed and the fifth repented with tears confessing his sins. As for the saint, he went to the desert and disappeared there, lest his stay be a stumble to others.

Since nothing was known of St. Narcissus whereabouts, another man was chosen in his place whose name was Dius. Dius remained for a short period of time; he then departed. Upon Dius' departure they chose another called Ghordinus. When the time of persecution was over, Abba Narcissus returned to Jerusalem where he was greeted by his people with great joy. Ghordinus asked him to take over his Chair but, he refused preferring the solitary life. Ghordinus insisted that he stays with him in his cell. St. Narcissus stayed with him for one year at the end of which Ghordinus departed and St. Narcissus acquired his Chair. He had aged and was very week so, he asked his people to choose another bishop, but they refused.

Alexander, Bishop of Cappadocia, came to Jerusalem to visit the Holy Land and pray. When he was about to return, after the feast, the people heard a great voice in the church of the Resurrection saying: "Go to the gate of the city, the first one to enter it, seize him, make him stay to assist Narcissus." When, they went to the gate, they met the Bishop Alexander, and pleaded with him to stay to assist Abba Narcissus. After much resistant, Bishop Alexander decided to accept and stay until the departure of St. Narcissus.

This father remained on the Episcopal Chair for thirty seven years, and all the years of his life were one hundred and sixteen years. 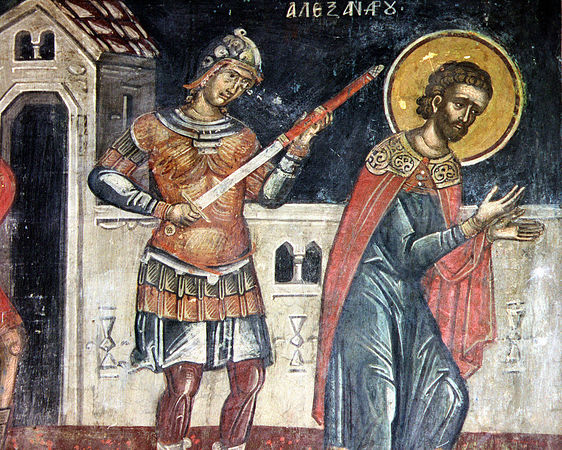 2. The Martyrdom of St. Alexandrus.

On this day also St. Alexandrus, the soldier, was martyred during the reign of the infidel Emperor Maximianus. When this saint refused to raise incense for the idols, the Emperor punished him. The Emperor ordered him hung by his hands and a large heavy stone tied to his feet. He ordered him to be beaten, his sides burned, and placed lit torches against his face. When all these tortures did not dissuade him, the Emperor ordered him beheaded and he received the crown of martyrdom.

Today also is the commemoration of Anba Marcura, the Bishop.