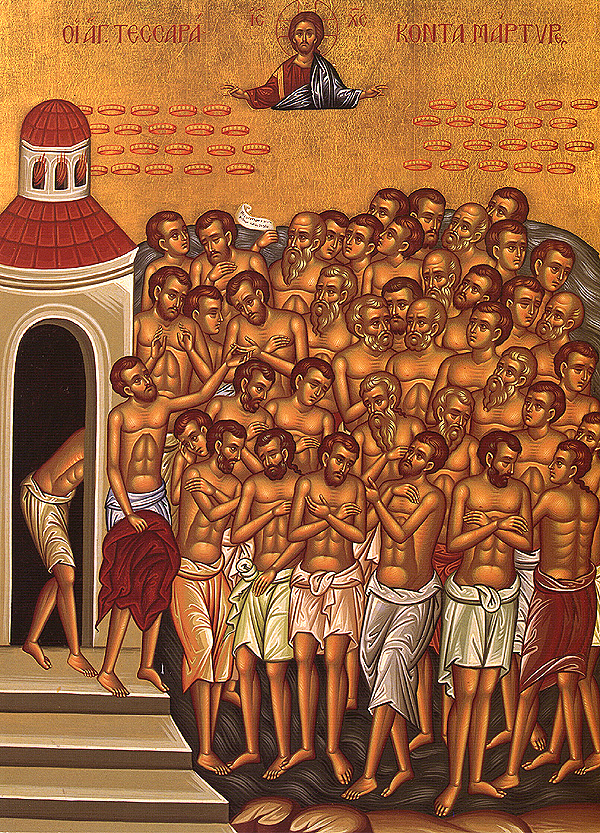 1. The Martyrdom of the Forty Martyrs of Sebastia.

On this day also the holy forty martyrs of the city of Sebastia were martyred. Emperor Constantine the great had appointed his friend Lecius ruler for the east and commanded him to treat the Christians well. When he arrived to his headquarter, he ordered his subordinate to worship the idols but they refused and cursed his idols. That night some of the soldiers and their children, from the city of Sebastia, made an agreement among themselves to go to the governor confessing their faith. While they were sleeping the angel of the Lord appeared to them, strengthened them and comforted their hearts.
In the morning they stood before the Governor and confessed their faith in the Lord christ, he threatened them but they were not afraid. He commanded his men to stone them, but the stones came back upon those who stoned them. He ordered to throw them in a nearby lake, which was icy. Their organs were severed because of the excessive cold. One of them whose strength was weakened, went out of the icy water and entered the bath house nearby the lake. The heat in the bath house melted the ice that was on him but he died quickly, and lost his reward.
One of the guards saw angels descending from the heaven and in their hands crowns, they placed them over the heads of the thirty nine martyrs and remained one crown in the hand of the angel. The guard went down into the lake shouting "I am ChristianI am Christian." He took the crown that was in the hand of the angel and was counted among the martyrs.
Among the martyrs, were young men, whose mothers encouraged and strengthened them. Because they remained in the lake for a long time and they did not die, the Governor wished to break their legs, but the Lord took their souls and reposed them. He ordered to burn their bodies and to cast them after that into the sea. As they were carrying them out of the lake, they found a young man alive, so they left him. His mother took him and tried to threw him on the wagon with his mates but they put him off the wagon again for he was still alive. His mother took him and he died in her bosom so she put him back on the wagon. They took them outside the city and cast them into the fire which did not harm them, then they casted them into the river.
On the third day those holy martyrs appeared to the Bishop of Sebastia in a vision and told him: "Go to the river and take our bodies." He went with the priests, deacons and the people to the river and found the bodies. They carried the bodies with great honor and placed them in a beautiful shrine, and their strife was heard in all the countries.
May their prayers be with us and Glory be to God forever. Amen.

On this day also is the commemoration of the return of the Great Sts. Anba Macarius the Great and Anba Macarius of Alexandria, from exile on an island in Upper Egypt. Emperor Valens the arian had exiled them to this island.
The natives of this island worshipped idols, and according to the orders of Valens the two Saints were tortured severely for three years. It came to pass one day that satan entered the daughter of the pagan priest of this island and tortured her. St. Macarius the great came forward and prayed over her and the Lord healed her and subsequently the priest and the people of the island believed on the Lord Christ. The Saints taught them the facts of the Christian faith and baptized them on the eve of the feast of Epiphany, 11th. of Tubah, changed the temple into a church, and with a revelation from the Lord Christ they ordained priests and deacons for them.
When they wished to return they did not know the way, so the angel of the Lord appeared to them, guided them walking, until they reached Alexandria. From there they went to the wilderness of Sheahat (Scetis). The monks of the wilderness came out to meat them, and they were at that time about fifty thousand monks among them were Anba John the short and Anba Bishoy, and they all rejoiced to meat their fathers.
The prayers of these Saints be with us. Amen.

3. The Departure of Abba Dionysius, the Fourteenth Pope of Alexandria.

On this day (March 8th, 264 A.D.) the great father Abba Dionysius, the fourteenth Pope of Alexandria, departed. His parents were stare worshippers of the Sun (Sabians) and they put emphasis on teaching him all the knowledge of that sect.

One day a Christian old woman passed by him, who had with her some pages of a book containing an Epistle of St. Paul the apostle and offered it to him to buy it. When he read it he found in it strange sayings and unusual knowledge. He asked her: "For how much will you sell it?" She said: "For one dinar of gold." He gave her three dinars and asked her to find the rest of the pages of the book and he was willing to pay her double. She went and brought him more pages. Having read them through he found the book to be still incomplete, he asked her to search for the rest of the book. She told him: "I found these quires among my father's books. If you want to acquire the complete book, go to the church and there you can find it."

He went and asked one of the priests to show him what is called the Epistles of Paul. He gave it to him, read it, and memorized it. Then he went to St. Demetrius the twelfth Pope, who taught and instructed him in the facts of the Christian faith then baptized him. He became well rehearsed in the doctrine and knowledge of the church, and Anba Demetrius appointed him a teacher for the people.

When Anba Demetrius departed and Anba Heraclas (Yaroklas) was enthroned, he appointed him as a deputy to judge among the believers and entrusted him to administer the affairs of the patriarchate.

When St. Heraclas departed, all the people agreed to appoint this father Patriarch. He was enthroned on the first of Tubah (December 28th, 246 A.D.) during the reign of Emperor Philip who was a lover of the Christians, and he shepherded his flock with the best of care, nevertheless, he suffered much tribulations. When Decius rose up against Philip and killed him, and reigned in his place, he incited persecution against the Christians. Decius slew many of the patriarchs, bishops, and believers. This father endured much suffering during that time. Decius died and Gallus reigned after him, and persecution quieted down during his reign.

When Gallus died and Valerian reigned in his place, he renewed the persecution severely against the Christians, and his men seized Abba Dionysius and imprisoned him. They asked him to worship the idols but he refused saying: "We worship God the Father, and His Son Jesus Christ, and the Holy Spirit the One God." They threatened him, killed few men in front of him to terrify him but he was not afraid. They banished him and shortly after, they brought him back and told him: "We have been informed that you consecrate the offering secretly by yourself." He replied: "We do not forsake our prayers day or night" then he turned to the people present around him and told them: "Go and pray and if I am away from you in the body, I shall be with you in spirit." The governor became raged and returned him to exile.

When Sapor king of Persia overcame Emperor Valerian and seized him, his son Gallienus, who was wise and gentle, took over the empire. He released all the believers who were in prison and brought back those who were in exile. He wrote to the Patriarch and the bishops a letter to assure their safety in opening the churches.

In the days of this father, certain people arose in the Arabian countries saying: "That the soul dies with the body, and on the day of Resurrection, it shall be raised up with it." He gathered against them a council and anathematized them. When Paul of Samosata denied the Son, a Council assembled against him in Antioch, this Saint was not able to attend for his age. He wrote a letter to the council, rich with wisdom, explained in it the corruptive opinion of this heretic, and stated the true Orthodox belief. He finished his good strife, and departed in a good old age on (March 8th, 264 A.D.), having sat on the Apostolic Throne seventeen years, two month and ten days.