Baramhat 14 : The Departure of Anba Kyrellos (Cyril) the Seventy Fifth Pope of Alexandria, the Martyrdom of St. Shenouda (Sinouti) El Bahnasawy and the Martyrdom of the Sts. Eugenius, Agathodorus and Elpidius.

1. The Departure of Anba Kyrellos (Cyril) the Seventy Fifth Pope of Alexandria.

On this day of the year 959 A.M. (Marsh 10, 1243 A.D.) departed the holy father Anba Kyrellos, the seventy fifth Pope of Alexandria, who was known as Ebn-Loqloq. This father was enthroned on the twenty third of the month of Baounah, 951 A.M. (June 17th., 1235 A.D.). There were objections at first in choosing him but finally they unanimously agreed on him.

During the days of this father a holy council convened, which was attended by all the bishops of the See of St. Mark, and they put down a comprehensive cannons for the church. The honorable scholar El-Safy Ebn El-Assal was the secretary of this council. This father sat on the Patriarchal Chair for seven years, eight month and twenty three days. He departed in El-Shamaa (Wax) monastery in the year 959 A.M. (March 10, 1243 A.D.)

On this day also St. Shenouda (Sinouti) El Bahnasawy was martyred. Certain men laid accusations against him before Maximianus, a governor appointed by Diocletian, that he was Christian. The Governor brought him, and asked him about his faith, and the Saint confessed his faith in the Lord Christ and that He was the True God. He ordered the soldiers to throw him on the ground, to beat him with hammers until his flesh was torn, and his blood flew on the ground, then they casted him into a prison with repulsive odor. The Lord sent Michael the Archangel to him, healed his wounds, encouraged and strengthened him. He told him that he will receive the crown of glory after he had endured what would befall him from severe tortures.

On the next morning the Governor ordered his soldiers to go and look at him, and they found him standing up praying. When they told the Governor about him and when he saw him whole and un-harmed, he was amazed and said: "He is a sorcerer." Then he ordered to crucify him with his head downwards, and to light fire under him, but it did not harm him. They squeezed him with the wheel and finally they beheaded him and hacked his body into pieces with swords and casted him to the dogs which did not come near him. During the night the believers took him and poured over him expensive perfumes, shrouded him in costly wrappings, laid him in a coffin and buried him. 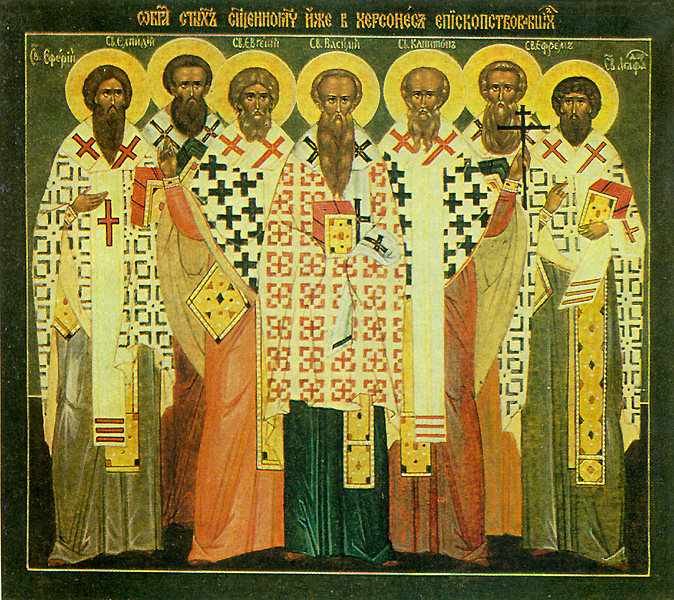 3. The Martyrdom of the Sts. Eugenius, Agathodorus and Elpidius.

On this day also the Sts. Eugenius, Agathodorus and Elpidius were martyred. These holy men were Christians, through their fathers and forefathers, walking in the way of God, and had a great deal of knowledge about the church subjects. St. Hermon (Armos) Patriarch of Jerusalem ordained them bishops without parishes to go around preaching and teaching the word of God. They went and preached in many cities, and the people of one of the cities went out, beat them very severely, then they stoned them until they departed in peace and received the crown of martyrdom.