Baramhat 17 : The Departure of Lazarus, the beloved of the Lord, the Commemoration of the Sts. George the ascetic, Belasius the martyr, and Anba Joseph the bishop, the Departure of St. Basilius, Bishop of Jerusalem and the Martyrdom of St. Sedhom Bishay in Domiat. 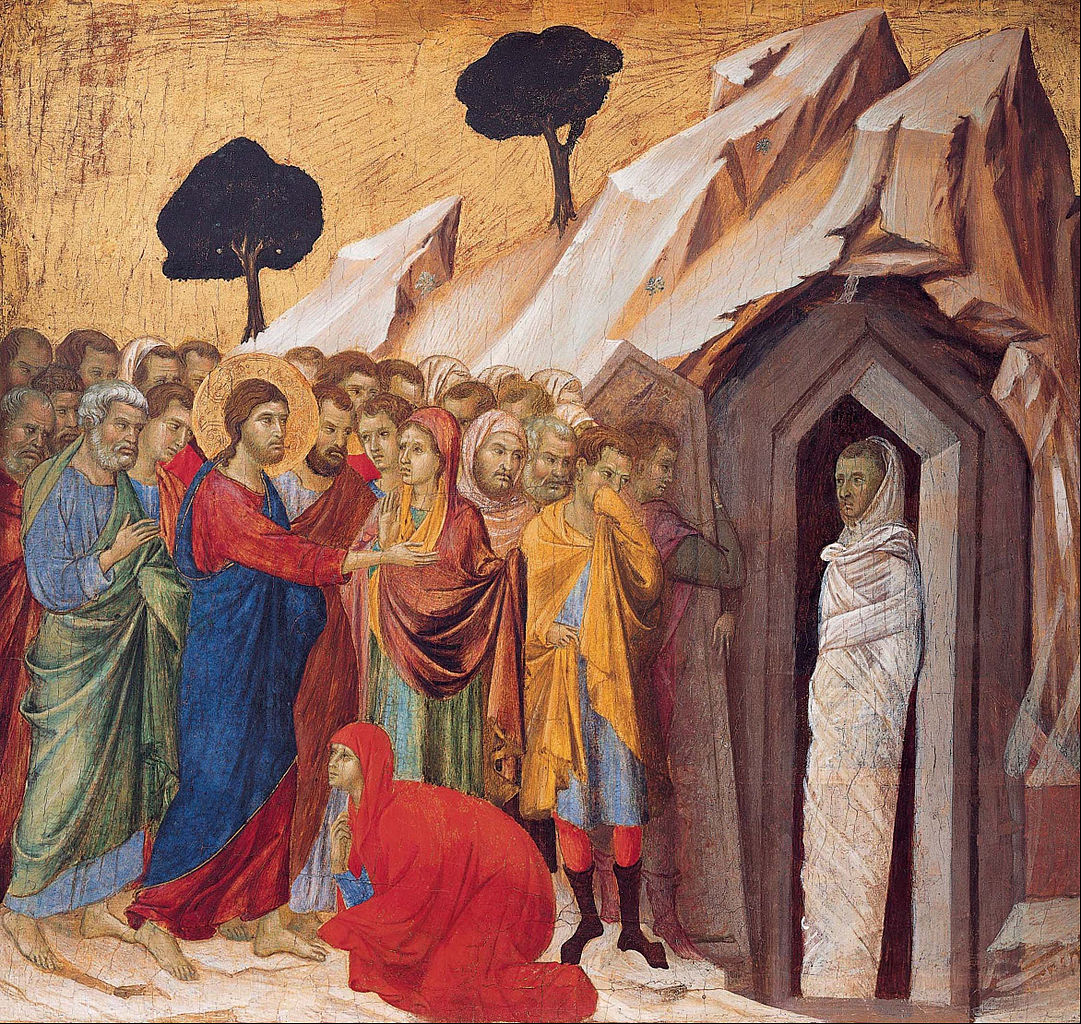 1. The Departure of Lazarus, the beloved of the Lord.

On this day the righteous Lazarus, the beloved of the Lord Christ, departed. He was the brother of Martha and Mary who anointed the Lord with fragrant oil and wiped His feet with her hair. When Lazarus fell sick the sisters sent to the Lord Christ saying: "Lord, behold, he whom You love is sick." When Jesus heard that, He said, "This sickness is not unto death, but for the glory of God, that the Son of God may be glorified through it." Now Jesus loved Martha and her sister and Lazarus. So, when He heard that he was sick, He stayed two more days in the place where He was" to magnify the miracle.

Then after this He said to the disciples, "Let us go to Judea again." The disciples told Him, "Rabbi, lately the Jews sought to stone You, and are You going there again?" Jesus answered, "Are there not twelve hours in the day? If anyone walks in the day, he does not stumble, because he sees the light of this world. "But if one walks in the night, he stumbles, because the light is not in him." These things He said, and after that He said to them, "Our friend Lazarus sleeps, but I go that I may wake him up." Then His disciples said, "Lord, if he sleeps he will get well." However, Jesus spoke of his death, but they thought that He was speaking about taking rest in sleep. Then Jesus said to them plainly, "Lazarus is dead. And I am glad for your sakes that I was not there, that you may believe. Nevertheless let us go to him."

When the Lord came to Bethany which is nearby Jerusalem He stood before the tomb and said: "Take away the stone." Martha, the sister of him who was dead, said to Him, "Lord, by this time there is a stench, for he has been dead four days." Jesus said to her, "Did I not say to you that if you would believe you would see the glory of God?" Then they took away the stone from the place where the dead man was lying. And Jesus lifted up His eyes and prayed then he cried with a loud voice, "Lazarus, come forth!" And he who had died came out bound hand and foot with graveclothes, and his face was wrapped with a cloth. Jesus said to them, "Loose him, and let him go." (John 11:1-45)

That was to manifest the reality of his death, so no one would think that this was deception with previous arrangement, for that the miracle was magnified and many believed.

The prayers of this righteous be with us. Amen.

2. The Commemoration of the Sts. George the ascetic, Belasius the martyr, and Anba Joseph the bishop.

On this day also the church celebrates the commemoration of the Sts. George the ascetic, Belasius the martyr, and Anba Joseph the bishop.

3. The Departure of St. Basilius, Bishop of Jerusalem.

On this day also of the year 1615 A.M. (March 26th., 1899 A.D.) the great father Anba Basilius, Metropolitan of Jerusalem, departed. This father was born in the village of El-Dabah, Farshout county, the province of Quena, for righteous parents. They nursed him with the milk of righteousness since his young age, as they taught him reading and writing, so he grew on loving perfection and moral excellence.

When he was twenty-five years old he went to the monastery of St. Antonios and put on the monastic garb in the year 1559 A.M. He persevered in worshipping and ascetism and because he was adorned with righteousness and piety they ordained him priest in the year 1565 A.M. and archpriest (Hegumen) in the year 1568 A.M., then they appointed him an Abott for the monastery. He managed the monastery well with gentleness, wisdom and meekness that made the blessed Anba Kyrellos IV to ordain him Metropolitan for Jerusalem and the parishes that were attached to him: El-Kaliobia, El-Sharkia, El-Dakahlia, El-Gharbia, Suez, Domiat, and Port-Said.

He had shown prudence in managing the affairs of these parishes that made him the center of admiration and pride to the Copts. All his efforts were dedicated for the building of churches all over his parish, buying and renovating properties in Jaffa and Jerusalem. He was loved by all the people of Syria and Palestine, regardless of their religion or political persuasion, especially the rulers of Jerusalem, for his wise policy and straight morals.

During his days a dispute aroused from the Ethiopians where they claimed their ownership for the monastery of El-Sultan in Jerusalem. Because of this father and his vigilance they could not establish an ownership for the monastery. He attended the enthronement of Pope Demetrius II, the hundred eleventh, and Pope Kyrellos V, the hundred twelfth. He spent his days in continuous effort for what was good for his people and departed in peace. 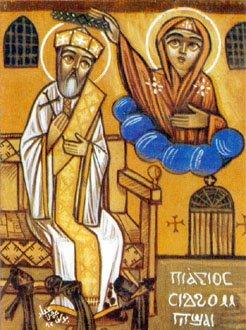 On this day also the church commemorates the martyrdom of Sedhom Bishay in Domiat on the 17th. of Baramhat year 1565 A.D. (March 25th., 1844 A.D.). He endured the torture for the Name of the Lord Christ and his martyrdom made the rising of the Cross during the Christian funeral processions openly, for it was forbidden before.

This martyr was a clerical employee in the government of the port of Domiat during the days of Mohammed Ali Basha the Governor of Egypt. A revolt of mobs in the port arose, they seized Sidhom Bishay and accused him falsely that he cursed Islam and witnessed against him before the religious judge a low uncivilized person and a donkey driver. The judge decided either he would forsake his faith or be killed, he whipped him and then sent him to the Governor of the city. After the Governor had examined his case he issued the same judgement against him as the judge did. Sidhom was steadfast in his Christian faith, not caring to be killed. They whipped, dragged him on his face down the stairs in the Governor palace, then they put him on a buffalo facing the tail and went around with him in the streets of the city insulting and degrading him. The Christians in the city became afraid and locked themselves in their houses.

The mob continued to insult him and tortured him in different ways until he was about to deliver his soul; so they brought him to the door of his house and left him there. His family went out and brought him inside and five days later he departed to heaven.

His departure was a great martyrdom, and the Christians counted him among the holy martyrs. They gathered regardless of their denomination and joined in his funeral in a celebration that there was nothing like it before. The Christians carried their arms and the priest put on their vestments headed by the Archpriest Yousef Michael who was the head of the Coptic congregation in Domiat and accompanied by the priests of the other denominations. They marched in his funeral in the streets of the city and in front of him the deacons carrying the banners of the Cross, and they arrived to the church where they prayed the funeral rites. The people went on objecting this reprehensible and painful incident and talking about the patience and endurance of the different kinds of torture in silence and the steadfastness of Sidhom the martyr.

The prominent people of the Christian community in Domiat deliberated as how to avoid these incidents in the future. They decided to ask the consuls of the foreign countries to mediate with the ruler of the country and the Pope the Patriarch of the Copts and sent to them detailed reports. Mr Michail Sorour the official representative of seven countries in Domiat was in charge of this mediation.

The ruler of Egypt was concerned about this incident and sent two official representatives to examine the case. So they reopened the inquiry and they realized the injustice and the ill-treatment that befell the great martyr and convicted the judge and the governor for their wrong doing, stripped them from their honor then exiled them. They asked, as a good will and to comfort the people, to allow the raising of the Cross publicly before the Christian funerals, and the ruler allowed that in Domiat. This was allowed later on all over the country during the Papacy of Pope Kyrellos IV.

The blessings of this great martyr be with us and glory be to God forever. Amen.