Baramhat 20 : The Departure Of the St. Anba Khail (Mikhail) the Fifty Six Pope of the See of St. Mark and Raising of Lazarus from the dead. 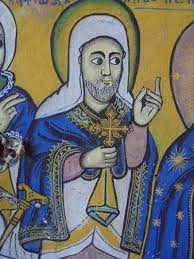 1. The Departure Of the St. Anba Khail (Mikhail) the Fifty Six Pope of the See of St. Mark.

Pope Cosma II built a church on the name of St. Ebtelmaos in the city of Danousher which was under the jurisdiction of the bishop of Sakha. The people of Danousher desired to invite the father the Patriarch Anba Mikhail and some of the neighboring bishops to consecrate this church but the Bishop of Sakha was not pleased with this idea. When they did against his wish and the father the Patriarch along with the bishops came, this bishop refused to stay and he left the church pretending that he was going to check on their meal. When the Bishop did not come back, and the time to start the service had passed, the bishops and the elders asked the father the Patriarch to begin the service. Having urged the Patriarch and pointed out that he was the father of them all and having authority over them, with difficulty he rose up and prayed the prayer of thanks giving and the offering of the Lamb. When the Bishop heard of this, and for his wickedness and his love for the glory of the world, he became enraged with the excuse that the Patriarch had violated the cannons of the church and celebrated the divine Liturgy in a parish without the permission of its bishop. He returned to the church in hast and Satan entered his heart, he transgressed against the holy and pure altar and the offering that was on it, then left the church full of wrath. The father the Patriarch completed the Divine Liturgy with calmness and maturity.

On the following day the Patriarch held a council from the bishops who were with him, the priests, and the scholars and they excommunicated this bishop and appointed another in his stead. That Bishop became furious, Satan entered his heart and he went to the Governor of Egypt Ahmad Ebn-Tolon and told him: "The Patriarch is very wealthy, and his churches are filled with vessels, in gold and silver."

This Governor was preparing to go to war and needed funds to finance these preparations. He called the Patriarch and demanded the church funds and its vessels, but the Patriarch refused. He shut him up in prison with a deacon whose name was Ebn El-Monzer for a year during which the Pope ate only bread, salt, and boiled beans. John and Moses, two scribes of the Governor, agreed with the scribes of the Governor's minister John and his son Macarius to free the father the Patriarch and they asked for the minister's help who agreed to their request. He interceded on their behalf before the Governor Ebn-Tolon who agreed on a condition that the Patriarch pay him 20 thousand Dinar. The Patriarch wrote a promissory note to pay the amount on two installments: the first after one month and the second after four month and this way he was able to leave the prison. When the time came to pay the first instalment those scribes paid two thousand dinar, the minister contributed one thousand and Anba Michail paid seven thousands, he collected from the bishops and the believers.

The pope was compelled to travel to collect the sum required for the second instalment. When he was at the city of Belbays, a monk with ragged cloth passed by the Pope's disciples and told them: "Go and tell your teacher that the lord will relieve him from his fine after forty days." When the father heard that he sent for that monk but they could not find him. Before that period had passed Ebn-Tolon died and his son Khamarawaih, who forgave the Patriarch of his debt, took his place year 875 A.M. He called the Patriarch, comforted him and then tore up the promissory note as the monk had prophesied.

The wicked Bishop that caused all these troubles for the holy father Anba Mikhail, the wrath of God came upon him in his life and his death to be an example for others. This father spent twenty seven years on the chair of St. Mark, then departed in peace. 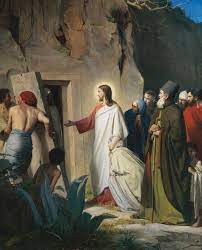 2. Raising of Lazarus from the dead.

On this day also the Lord raised the righteous lazarus from the dead and many people believed because of this great miracle.

Glory be to God forever. Amen.