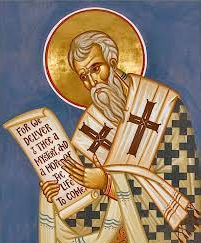 1. The Departure of St. Kyrellos (Cyril), Bishop of Jerusalem.

On this day of the year 386 A.D. the holy father Anba Kyrellos (Cyril), Bishop of Jerusalem, departed. This father was chosen in the year 348 A.D. as a successor for Anba Maximus, Bishop of Jerusalem, for his knowledge and righteousness. He did not stay long on his Chair, until a contention arose between him and Acacius Bishop of Caesarea about who had the right to be in primacy over the other. Kyrellos argument in that he was the successor of St. James, one of the Twelve Disciples.

Anba Kyrellos had sold some of the church vessels and distributed the money on the needy because of a famine that befell the land of Palestine. Acacius took this chance and made an effort to obtain an order to exile him from the country. Anba Kyrellos was exiled without any one listening to his case. In the year 359 A.D., he appealed his case before the council of Seleucia. The council called Acacius to hear from him his argument, but he did not attend, so they judged by removing him from his office, and the return of Kyrellos to his Chair (Parish). He did not stay long for Acacius went and enticed emperor Constans to assemble a council at Constantinople and the Arian bishops agreed with him. This council convened in the year 360 A.D. and ordered to exile this saint once more.

When Constans died, and was succeeded by Julian who ordered the return of all the exiled bishops to their chairs. This saint returned to his chair in the year 362 A.D. and shepherded his people faithfully and honestly, but he resisted the Arians. They went to emperor Valens the Arian who invalidated the order of his predecessor Julian stating the return of the exiled bishops to their chairs. This way St. Kyrellos was exiled for the third time, where he remained until the death of Valens in the year 379 A.D. When Theodosius the great reigned and assembled the one hundred fifty in a council against Macedonius (The second universal council), this father attended, and opposed Macedonius, Sabilius and other heretics. This Saint composed many Homilies and Exhortations, exceedingly profitable, in the Doctrines of faith and old traditions then departed in peace.

2. The Departure of St. Michael, Bishop of Naqadah.

On this day also the honored father, and the unblemished bishop Anba Michael bishop of the Chair of Naqadah, departed.

With his prayers may the Lord have mercy on us, and Glory be to God forever. Amen.