Baramhat 6 : The Martyrdom of St. Dioscorus and the Departure of St. Theodotus, the bishop.

1. The Martyrdom of St. Dioscorus.

On this day, St. Dioscorus was martyred at the time of the Arabs. He was from Alexandria, and was brought up as Christian but for unexplained reason he left the faith of his fathers and adopted the faith of the Arabs. He had a married sister in the city of Fayyum. When she knew what her brother did, she sent a letter to him saying: "I would have preferred that the news had come to me telling me that you had died a Christian, and I would have rejoiced, than that the news that reached me, that you are not dead, and you have abandoned the Faith of Christ your God." At the end she said: "Know that this letter marks the end of the relation between you and me. From this time on do not show me your face and do not write me."

When he had read his sister's letter, he wept bitterly, and he smote his face and tore his beard. Then he rose in haste and girded up his loins, prayed entreating God fervently and made the sign of the cross over himself. He went out of his house and wandered about in the city.

When the Muslims saw him in this condition, they brought him to the Governor who asked him: "You have left Christianity and joined our religion, so what happened to you?" He replied saying "I have been born Christian, and I shall die Christian, and I do not know except this." The Governor threatened him, beat him and inflicted great pain upon him and when he did not change his opinion, he shut him up in prison. The Governor sent to the Khalifa of Egypt presenting his case to him. The Khalifa ordered the governor to offer him leaving the faith of the Christians and entering the faith of the Khalifa, if he obeyed to give him much money and to reward him, otherwise to burn him. The Governor brought him out of jail and asked him to deny his faith but he refused saying: "I told you before that I have been born Christian, and I shall die Christian." He ordered him to be burnt. They dug a large pit outside the city, and they filled it with wood and they set fire in it. When the flames of the fire mounted up to a great height, they casted him in the pit after they had beaten him sorely and gashed his body with knives. He received the crown of martyrdom in the kingdom of heaven. 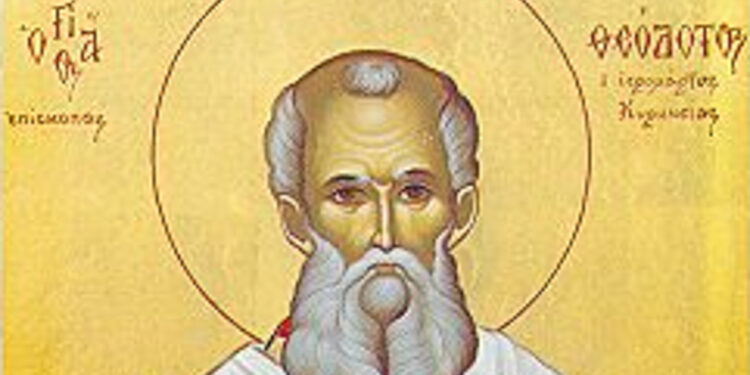 2. The Departure of St. Theodotus, the bishop.

On this day also is the commemoration of the departure of St. Theodsius the confessor, Bishop of Corinth which on the island of Cyprus. Julius, the Governor of this island, who had been appointed by Diocletian, had him brought before him. He demanded from him to deny the Lord Christ and to raise incense to the idols. When he did not obey his orders, he removed off the Saint's garments and lashed him painfully with whips made of buffalo hide, hanged him from his arms, and combed his body with steel combs inflicting him with gashes all over his body. Then they tied to his legs long iron bands, and dragged him to prison. He remained in prison until God perished Diocletian and Constantine the righteous Emperor reigned, who released him among all those who had been jailed for the sake of faith. St. Theodsius returned to his Episcopal Seat, and tended his flock, that he was entrusted with, well until he departed in peace.

May his intercession be with us and Glory be to God for ever. Amen.