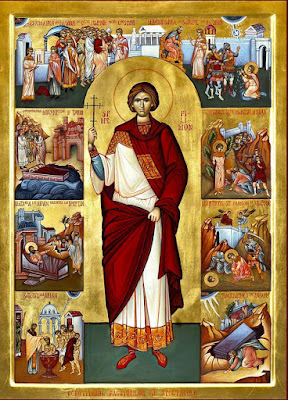 1. The Martyrdom of Sts. Philemon and Apollonius.

On this day Saints. Philemon and Apollonius were martyred. Philemon was the jester and singer, and Apollonius was the musician for Arianus the governor of Ansena (Antinoe). They were very close friends and they wished to receive the crown of martyrdom. One day, Philemon went to the Governor and confessed the Lord Christ before him, so he ordered to shoot him with arrows. After that, Apollonius came before the Governor and he also confessed the Lord Christ. When the Governor recognized him he became angry and ordered to shoot him also with arrows. While they were shooting Apollonius, one of the arrows glanced back and struck the Governor's eye and destroyed it. Saints. Philemon and Apollonius completed their strife and received the crown of martyrdom.

2. The Martyrdom of St. Mary the Israelite.

On this day also St. Mary the Israelite was martyred. This Saint did not know the Lord Christ and she lived an evil life. When she wished to repent and to return to the righteous life, the Lord sent to her a holy man who preached her, and revealed to her

the way of salvation by believing in the Lord Christ. He told her that the soul has to give an answer about all her deeds on the day of Resurrection. After death and departing of this world every one will be rewarded according to his deeds and explained to her the fearful punishments for the evil doers. She asked him: "What are the proofs on what you said, since the Torah that God gave to Moses the prophet and also my fathers did not mention this? so confirm to me the truth of what you said with biblical and logical proofs".

After he explained and confirmed to her all these facts she became convinced in her heart and mind. She asked him: "If I repent on my evil works would God accept me?" He replied: " If you believed that Christ had come to the world for the salvation of the human race, and walked in the way of repentance, God will accept you" and she believed and repented. When the Governor knew about her, he brought her before him. When she insisted on her Christianity, he ordered her beheaded by the sword and she received the crown of martyrdom.

May her intercession be with us and Glory be to God forever. Amen.